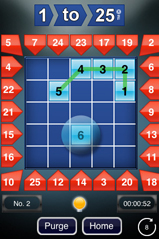 Just when you thought the greatest puzzle games for the iPhone and iPod Touch have already been coded, Syndicated Puzzles comes out with an interesting approach to a new puzzle game using the numbers 1 to 25.

With 1 to 25, your task is to carefully arrange all the numbers on a 5x5 grid, according to two simple rules. The "next to" rule states that every number placed on the board needs to have neighbors in a consecutive sequence. The goal is to form a snake like row of numbers, starting at 1 and ending with 25. The snake won't bite it's own tail, but will curl around their bodies.

The "edge" rule relates to the placement horizontally and vertically of any give number. Around the 5x5 grid, you will see all the 25 numbers laid out in a random order, with big arrows pointing towards the board. Tapping a number will highlight all the possibilities where you can place that number. You will have to place any given number on either a horizontal or vertical line, depending on the arrow of that specific number.

Two rules, 25 numbers and 25 places on the grid. Needless to say that there is only one correct space for each number. You're given every clue as to where to place the numbers. The rules will make it easy for you. and if this is not enough, you're given a "Purge" button to clear out any incorrectly placed numbers at any time. If you're given all these helping hints, the game should be literally solving itself. Then why is it so appealing a game? Well, with all the aid the developers gave you, each puzzle is still really hard to solve. It will take wits, strategy and thinking and rethinking to get the snake-like sequence just right, and this is what makes the game worth playing. The variety of puzzles also give 1 to 25 a great replay value.

You're looking at great controls, easy to use, with a simple slider for each number that's to be placed on the grid. On the down side of the game, the graphics are pretty basic. The game idea is pretty of the grid, and we'd like to see some graphic improvements for the next versions of the game.

The game is definitely worth a try, and for the 99 cents you're paying, 1 to 25 guarantees an unique experience with every new puzzle you'll try out.

Have this iPhone App already ?
What do you think of 1 To 25 ? Scroll down for our comment section and let us know!