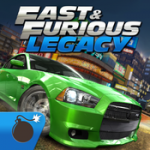 Fast & Furious 7 is probably one of the most expected movies this year. And the game is pretty cool, as well.

Ups: What I really loved about Fast & Furious: Legacy were the controls. I think car race games are one of the most exciting games out there, but I always find it difficult to control the car using the gyroscope option. But with Fast & Furious: Legacy, changing lanes is as easy, and intuitive as it gets: just tap right or left, and the car moves in the direction you want it to. The graphics are extremely cool, and realistic, as expected. You can drive over 50 cars that your favorite characters in the Fast & Furious series also drove. Throughout locations where your favorite characters also drove, like Los Angeles, Tokyo, or Miami. And besides completing challenges, there’s also an engaging Story Mode to get you even more caught up in the plot.

Downs: Fast & Furious: Legacy is a pretty complex game, so, besides racing, there are also other things you need to take care of. Upgrade, and customize your car, fix it, invest in a new one whenever you’ve got the money to do so, change the oil, and so on. And these things don’t always take just a couple of seconds to be done. Changing the oil, for example, takes up to two hours, if you don’t have the tokens to speed things up. And you can’t use the car in the meantime. So, technical problems might, sometimes, get in the way of the fun, racing part. But the good part is you don’t have to stop, and stare at the screen until the technical issue is fixed. You can’t play the game, indeed. But you can turn off the game, go on doing other stuff, and when you’re done, the repairing process will be done as well. In offline mode. And you didn’t have to do pretty much anything.

The Star Wars series has been inspiring the gaming world for years now. But as we are getting closer and closer to the release of the latest part of the series, the Star Wars inspired games keep appearing in the App Store. And they just keep getting better and better. Like Star Wars Rebels: Recon Missions.

Ups: Star Wars Rebels: Recon Missions is a really complex, but, at the same time, extremely easy game to play. It involves building, fighting, taking on missions, exploring new territories, and pretty much anything you’d like to see in a game. Your job is to guide Ezra Bridger in his fight against the Empire. This means you’ll take on missions from other characters, where you’ll fight against Storm Troopers, Drones, and evil bosses. Collect items. Win supplies to build your base. And save other characters from the hands of evil. All this throughout a captivating Story Mode that will take you through all sorts of exciting locations, and experiences.

Downs: Star Wars Rebels: Recon Missions is a really cool, complex, and engaging game. So, I think the only downfall is that you can’t play it from beginning to the very end totally free of charge. First 4 Levels are, indeed, free of charge. But to enjoy the other 30 available levels, you’ll have to make a couple of in-app purchases. Now, it’s not that they’re not worth the price. But I would have liked it more if the player had the possibility to unlock at least part of these levels, by completing certain missions, or collecting specific items, instead of having to pay to go on playing.

Looking to get your mind in shape this week, rather than your muscles? Then, you have got to try Rebus. But be prepared: this training is going to hurt.

Ups: Rebus is crazy addictive. And it is that type of game that doesn’t end when you turn it off. Quite the contrary. Rebus will probably get you thinking about image-word correlations all day long. It’s like the images somehow get stuck in your brain, and then, at some point, when you’re doing something completely random, like washing the dishes, it hits you. That image of a nail shaped as an S…the word you were looking for was Snail! Then, you just leave the dishes in the sink, with the water running, wipe your hands on your clothes, and hurry to insert that word you’ve been thinking about all day, but just now, finally managed to figure out. And then, you have another image to torture you for the rest of the day.

Of course, you don’t need to go through the torture every time. It will cost you 200 coins to find out the number of letters, 500 to find out one of the letters, as well, 1000 to receive the scrambled, but right letters forming the word, and 1500 to get the solution without you having to move a muscle more. Plus, when you run out of coins, you can always buy more, using real money. Or, what I found to be quite nice, watch a couple of videos, like or recommend the game, and earn the coins. Or put your mind at work just a little bit more. Because there's nothing better than that feeling you get when you finally find that word you were looking for.

Downs: Just like its name suggests, Rebus is so absurd that it is logic, and so logic that it is absurd. This means that every puzzle has its logic. But sometimes it’s so obvious that you just can’t see it. You know what they say: sometimes you just can’t see what’s standing right in front of you. So, you probably won’t be able to see things clearly right from the start. And that might get annoying real fast. But remember: most of the times, the easiest, most obvious solution is the one you are looking for.