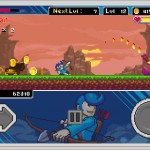 Slayin is an old-school, retro-designed, arcade game. Your job is to slay as many monsters as you can. The controls are as simple as it gets: you can only move your character left or right, and make him jump. And the gameplay is also quite basic: there’s no hidden pathways to follow. Once you guide your character in one direction, he will constantly move towards that point, until he gets from one side of the screen to the other, or until you change his direction. So, what makes Slayin a game worth playin’?

Nostalgia. If you grew up playing arcade games, then Slayin is guaranteed to bring back all those fond memories. Because, even if you can play Slayin on a touch-screen device, everything about it is old-school. You don’t just tap on the screen to control your character. You tap on move, and jump buttons on the screen. The design is classic retro. And even the actual monster slaying part is extremely Mario-like: if your character is the one who bumps into the monsters, then they’re dead. If the monsters come, or throw something from underneath or above the platform where your character is, then he takes the fall.

Constantly keep an eye on the life bar of your hero

But, of course, as any respectable game, your character can’t be put down with just one hit. He is, after all, a knight in shining armour. Each time he gets hit, he turns red for a brief moment, and you constantly have his life bar in sight, so you know his status at all time. Now, the good part is that, as you slay monsters, you collect coins that you can use to refill the life bar, or even buy a temporary armour to protect him. However, the not so good part is that you can’t always access this menu when you need to. So, once the life bar is full, don’t make rash decisions, thinking that you can refill it each time you want to.

The longer you play, the more fun it gets

Also, remember: the goal of Slayin is to go on with the game for as long as you can, while slaying the monsters, of course. And the more you go on, of course, the more fun it gets. You get to experience all sorts of cool battles, while encountering various villains, each one with its special strength and fighting technique. So, as you manage to hold on, nostalgia isn’t the only thing that keeps you playing, but the game itself gets quite engaging. However, once your character gets hit one too many times, the game is over. And you have to restart the whole game from the very beginning, which I, personally, find very annoying. I understand that’s the basic principle of an arcade game. But going through the same battles over and over again seems like watching reruns of the same show: no matter how much you like it at first, you will eventually get bored.

But once it’s game over, you have to start from the very beginning, over and over again

Other than that, I like it that you can collect points, and use them to buy new characters, backgrounds, and other fun things to embellish the gaming experience. And, since it is App of the Week in the App Store until Friday, you can enjoy the Slayin experience totally free of charge. I still think you need to be an arcade fan to find it totally addictive. But even if you’re not, it can still be a pretty fun experience, until you see the Game Over message on the screen one too many times.

Have this iPhone Game already ?
What do you think of Slayin? Scroll down for our comment section and let us know!