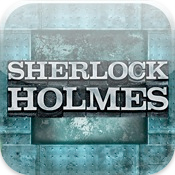 With the recent release of Sherlock Holmes by Guy Ritchie came the launch of the official iPhone game Sherlock Holmes Mysteries from Warner Bros. That is not to say that the AppStore had a shortage of detective stories and mysteries, or that Sherlock Holmes and Dr. Watson weren't already present on iTunes. The movie was out on the 25th of December in the US, the game came out on the 5 days earlier across the AppStore. Of course that would be an eye catcher right there. The character looks very realistically Robert Downey Jr. and sure enough Watson was an animated Jude Law. So you might be wondering if the game profited from the release of the movie, or better yet, if the movie profited from having the game released before hand.

The two are not alike (+1), but the movie is better in more ways than one (-1 for the iPhone game). But be prepared to leave your prejudices at the door with Sherlock Holmes Mysteries for the iPhone, as starting to play while having seen the movie will be a serious let down.

Mysteries takes you back to 1890s London and the game, from the creepy back alleys of London to the contemporary home interiors, embodies an aura of mystery in and of itself. You're playing Sherlock Holmes, the mastermind detective, who, by using a handful of skills, you need to solve two mysteries: "The Missing Momento" and "The Case of the Innocent Man."

You may first notice that Holmes is portrayed as a total smart-ass, very much like in the movie. His lines are somewhat funny and very ironical, and you're witnessing first hand, on many occasions, what it means to play stupid to uncover the criminal.

This 20 minute tutorial will take you through the basics of the game. Two of the three mini-games are revealed here, together with the basic controls involving moving and solving puzzles. While not that interesting, be sure to not judge a game by its tutorial, even though "The Missing Memento" is not labeled as such.

In this case, you need to interview the four people present in the bar and figure out who is the thief of some useless item. As you talk to each, be sure to notice Holmes' sarcasm and wits in sizing up a person from appearances. The conversations that take place are rather more of informative nature, as you don't have the option to choose responses that will perhaps get you to the final clue faster. You simply pick who you'd like to talk to and then tap your side of the script to advance the conversation. Even though there's not much involvement, paying attention to what's being said will be meaningful when you run around for clues later on.

In the first case, you're also introduced to the first mini-game in Sherlock Holmes, where you have to use you spirit of observation to reveal clues in a determined area (be it the floor, the bar counter or the body at the morgue). You're on a timer and you need to find a certain number of clues to win it. Between you and me, you won't find much of a challenge here. Simply slide your finger around the screen and tap the clues as they come up. They are then added to your item list and you can put them together later on and solve each mystery.

Once you've solved the first case, there's not much to it, so I won't get into details for it, you will have to face your opponent in a stand-off. A brilliant occasion for another type of mini-game. The Holmes vs. some bum mini-game is done in a first-person view and the whole action is based on tapping the icons that pop-up on the screen. Some will let you defend from a blow from your opponent, others will deliver punches, and you get the occasional swipe attack that inflicts more damage (uppercuts and such). Carefully tapping on each icon will build up Holmes' intuition and you can deliver more deadlier punches and take care of your opponent faster. There is a time limit to the match, but I didn't figure out what it was for since the fights were not that challenging and didn't wait around to see what happens when the clock runs out.

The third mini-game that you'll be introduced to later on is how to pick a lock or chase an opponent. They are both done in the same way, and they feature a Toobz-style game, with you revealing puzzle pieces and moving what are essentially tubes around the map to form a connecting pipe-line between you and the opponent (or your lock-picker and the lock). This is time-based as well, and it will provide you with a little more challenge than fighting or looking for clues.

Perhaps the main part of the game, and the most creative on the side of the developers, is how you're putting mystery clues together. Whenever a new clue is added to your inventory, or a new objective to your mystery list, it will make your brain light up, literally. The bottom left of your iPhone's screen shows you Holmes' brain and tapping on it will get you to the inventory screen. This is where all the magic happens: reading each clue, figuring them out, putting them together, and ultimately solving each mystery. One mystery solved will lead to the next one, and you're that much closer to solving the case.

The selection is not all trial and error. Reading each clue does help to putting it in the right place, and even though at times it seems like you can test every clue for one spot, the point is to solve a objective not to do multivariate testing, and using your common sense will get you faster to achieving your goal.

My main disappointment with controlling Sherlock's Mind is that you can't drag and drop. Instead, you need to tap a clue, tap an objective and tap on "Put to mind." It seemed to me that the developers could have made the controls easier and the experience on the iPhone seamless. Either way, it seemed to me that this is the core of Sherlock Holmes, and if you put aside all the mini-games, the beautiful 3D renders, the Victorian streets and the London backdrops, it's all about the mystery and Sherlock's mind. Sure, you could have done tons of other mini-games, more cases, and nicer designs, but get Sherlock's Mind right and you have a winner.

The Case of The Innocent Man

While the first case to solve, "The Missing Memento," is somewhat of a tutorial and short introduction of what's to follow, "The Case of the Innocent Man" will have you jumping back and forth all around the map, talking with suspects, using your detective insights to discover clues, fighting for life, and for money, and ultimately unraveling a mystery that will have you playing for roughly 3-4 hours.

The mystery, if you will, takes you through 11 locations on the map, and your main objective is to rescue an innocent man from paying for a crime he apparently didn't commit. For this, you will have to solve a dozen other smaller mysteries, talk to the various characters involved and generally follow a route that is sometimes not as apparent as you'd believe.

Locations are added as you unravel clues, talk to people and, generally, when you need them and not before. It's what you'd call a need-to-know basis. Each location is a 3D scene that you can investigate by panning the panorama by sliding your finger on the iPhone's screen. Various clues will be hidden on each location and the game will let you know of their presence by popping up an "Inspect" button when you're looking straight at them.

I must say the case did prove to be a challenge, but perhaps not in the sense of revealing the identity of the killer to yourself (at some point it became obvious who did it), but rather to the game, by finding all the clues it wanted you to find and putting them together. The last two mini-cases had me running around the map for one clue and after checking the Hints (in the Help Section) and still puzzled, I nearly gave up on it.

Still, the game inflicts a kind of stubbornness to complete it that is downright amazing. You know who the culprit is, but you need to prove it to the iPhone. In all honesty, I found that to be a big plus for me with Sherlock Holmes Mysteries.

I did finish it though and if you get stuck in one place and the Hints in the Help Section don't get you out, let me know and I'll point you in the right direction.

Some tips and tricks

I agree that the game lacks in some areas, and several pitstops throughout the game you don't really know what to do next to advance in the game. But that's why the developers are here, and WarnerBros decided to help us out. So bellow are a few of the tips they found most important.

1. Retrace Your Steps! If you feel like your investigation is stalling out, try revisiting previous location. Make sure you talk to everyone, as many clues are uncovered in conversation.
2. Tap Into Sherlock’s Mind! Touch an objective to bring it to Sherlock’s Mind. You will need to complete the chosen objective before you can put the clue to mind by selecting it and tapping “Put to Mind”.
3. Locate the Screwdriver! If you find that you are lacking this essential tool for assembling the Electric Gramophone, you would do well to revisit locations. Rotterdam was known to be quite the tinkerer. Too bad he lies chilling in the Morgue.
4. Pick the Locks! When picking locks, you will need to discover a path that connects all of the tumblers between the start and the finish.
5. Find the Copper Coil! If you are having problems finding the copper coil for the Electric Gramophone, be sure to scour Pennington Place.

I would add the one that had me almost giving up. If you need to find the last clue "Suttherford lied" be sure to carefully check his estate, the cupboard area.

An overall nice experience, really interesting for fans, maybe a bit disappointing for heavy iPhone gamers, but definitely worth the asking price of $0.99.

I have one promo code to give away. First come, first served as usual. Leave me a comment and that'll do it.

Have this App already ?
What do you think of Sherlock Holmes ? Scroll down for our comment section and let us know!