Home » Can you survive the end of the world?

Can you survive the end of the world? 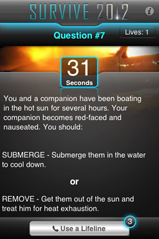 7th century Mayan prophet Pacal Votan foretold of our accelerated technological society and left an universal message for future generations that the circle of evolution will complete on winter solstice, December 21, 2012 AD. This is a thousand-year-old Mayan prophecy foretelling the end of the world to happen in the year 2012. Sony Pictures picked up on it and turned it into a movie to be released this November. As we've seen with Ice Age Dawn of the Dinosaurs, before the movie, there was the iPhone app. The difference now is, 2012 Movie - the iPhone app - makes sense and gets the user involved. Not to mention the app can easily be categorized as an Educational iPhone application.

In 2012 Movie, you embark on an epic adventure to avoid global cataclysm. Your task is to reach Tibet and high grounds in order to live to tell the tale of the end of the world as we know it. The way you do this is by answering a series of trivia-style questions that will test your survival skills.

The app starts up with the game getting your current location. It is actually the part where I was a bit confused as 2012 picked up my location somewhere in Rome, as opposed to Bucharest, Romania. So I didn't know whether it is part of the game, or the GPS made a mistake. Either way, I had to go from Rome to Tibet, a 7,242-mile-long trip, filled with all sorts of tricky survival questions.

As you move from one location to another, you have to answer two questions correctly from each stage to move on to the next location, and one step closer to Tibet and your salvation. You have three lives in the process, and each question you get wrong will lose you one. The questions are rather interesting and provide useful tips on survival not only in the wild or your average cataclysmic situation (comet hitting Earth, the Sun exploding or your typical end of the world), but also solutions to typical first-aid dilemmas that can easily make a difference in real life.

One other aspect of the iPhone game worth mentioning is the possibility to phone a friend to help you with a particular question. At the start of your journey, the app will ask you to turn on Lifelines. Whenever you find yourself in a survival situation you can't seem to get out of, you can use one of the three Lifelines and phone a friend. The catch is you only have 60 seconds to ask him the questions and give him the possible answers, and these are not in front of you. Once you decide to use a lifeline, be sure to memorize the question and the answers, as you will have only 60 seconds to repeat them to your friend and they to answer correctly. I thought it was a nice touch to the game, one you wouldn't normally find with other trivia games.

Sad to say, until writing this review, I was unable to survive 2012. The questions are tricky and tough, so I couldn't get to Tibet with only three lives to spare. The game is entertaining though, and I can't wait to get my hands on the movie, being a fan of prophecies and conspiracies. The app is available for free to download in the App Store, and it's definitely worth checking out.

Have this iPhone App already ?
What do you think of 2012 Movie ? Scroll down for our comment section and let us know!

One Bite to “Can you survive the end of the world?”