Home » Cuteness At Its Best 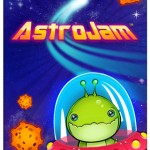 Cuteness At Its Best 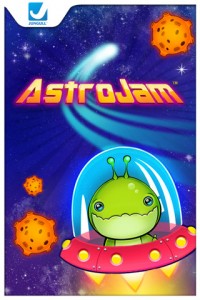 You’ve probably seen this type of game before. And even played it. Yes, you may be addicted to it. Whatever it’s called, your addiction needs a new name. And that name is AstroJam - a cute iPhone game featuring cute graphics and cute sounds. Did I just say cute thrice?

The idea of the game is simple. You control a flying saucer with your typical green alien in it. You fly around the galaxy minding your own business, but you’re not alone. There are asteroids everywhere and it’s up to you to keep your green buddy safe.

They way you do this is by moving the flying saucer around the screen, avoiding the asteroids. You basically use your finger to drag and slide the ship around the iPhone’s screen.

The longer you survive, the faster the asteroids move. Don’t worry though, there are power-ups to help you along the way. Collect the shield to keep you safe and invincible, even when getting hit by asteroids. Collect the frozen asteroid to significantly slow down the asteroids around you. Of course, these power-ups only last for a few seconds, and then you’re on your own again.

The game is not that fast-paced. The first 20-30 seconds of the game are easy to get through, and a careful hand and eye will get you further even with the increasing speed of the asteroids.

I’ve read some one-star reviews in the App Store that said the game didn’t start. I’m reviewing version 1.1 and everything works fine. I get an error message at the beginning of the game that says I need a GameCenter account, but tapping “Try again” makes that go away and I can play the game no problem.

My one issue with AstroJam is its replay value. You start off with four asteroids, and there are no more added later on in the game. It’s only their speed that increases. Perhaps a higher difficulty level might make things more interesting.

Other than that, I have no problem recommending this game, if only for its oh-so-darn-cute graphics. That little green dude makes all kinds of noises and gestures, like kissing the flying saucer’s glass window, tapping it and such.

Have this iPhone App already ?
What do you think of AstroJam ? Scroll down for our comment section and let us know!