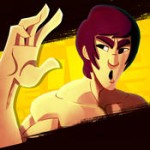 Have you ever watched an action movie and though it was so unrealistic for one guy to be able to beat up 10 or 20 more other guys at the same time? Well, with Bruce Lee: Enter the Game, you’ll find out it’s not really impossible. Especially, when you’re Bruce Lee.

Ups: Bruce Lee: Enter the Game will get you hooked from the first punch you throw. It’s a really engaging, action-packed game that will keep you at the edge of you seat the whole time. The controls are extremely intuitive, and you have a pretty extensive Tutorial, so you get to find out what you need to do in no time. Your primary task is to help Bruce Lee beat up enemies, by using his well-trained skills. Also, you must keep him in shape by constantly upgrading his vitality, and power level, using the coins you earn each battle. You can also use coins to start every battle with an active power-up that will make Bruce Lee even stronger than he already is. Plus, as he makes more and more combos, the superpower bar fills up, which makes him almost invincible for a short time.

Downs: The controls are intuitive and extremely well explained to you, but there is quite a lot information for you to grasp in at once. Every different type of character has a week spot, so it will take you awhile to remember which enemy has which soft spot. Plus, as the enemies are stronger, they require special moves to be knocked over. And I think I got to pull out those special moves only 50% of the time, because, as you prepare Bruce for these moves, he becomes more vulnerable, and if he gets hit in the meantime, you have to start the process all over. So you need to be fast. And calculated. And a somewhat passionate gamer, because the game gets pretty hard, real quick.

Download Bruce Lee: Enter the Game from the App Store

Kiwi Clapas will bring the bird frenzy back to your devices, and to your home, office, or wherever you are. It doesn’t involve shooting birds at pigs, but it’s just as challenging, and strategical.

Ups: Kiwi Clapas puts your mind to the test. You have an open space, with all sorts of angry-birds-looking Kiwi birds that you must trap to rescue in your bohemian hot-air balloon. To do so, you must build walls to trap them in-between. But while some sort of Kiwi birds just sleep all day, and don’t stay in your way, the most of them are totally out of control. They move all around, each one with its own crazy habit and way of moving from one place to another. So, even if the action of building the walls is extremely simple and intuitive, you must always pay attention when and where to build your next wall. Because, your goal is to trap the Kiwis between the walls, and not to crush them inside the construction.

Downs: Kiwi Clapas is an arcade game. There’s nothing wrong with arcade games. Some of the best games ever made were arcade. But I think Kiwi Clapas would be more fun, and engaging, if it were a level-based game. It’s quite frustrating to clear 5, or 6, or even more stages, get that feeling of excitement as the challenges get more interesting, only to lose at some point, and have to start the game all over again. I’d probably do that once, twice, maybe 10 times. But the farther along the game you get, the less willing you are to start the game from scratch, all over again.

Item-matching games are still in. But it’s nice to see when a game brings more to it than the basic item-matching part. And Rescue Quest is one of these games.

Ups: In Rescue Quest, the purpose of item-matching is not only to clear as many same colored or shaped items on the screen. There’s also a story to it, and an enchanting adventure at the core of the game. Your job is to help a fantasy character rescue the captured spritelings. That are also magical, fantasy, tiny creatures trapped by a malevolent sorcerer. To do so, you don’t have to fight any villains, or evil sorcerers. You just need to clear your character’s path, all the way to the place where the spritelings are being trapped. And to do so, you have to match same colored and shaped items, as you can probably imagine by now. Match more than 3 identical gems to get all sorts of super-gems that will help you clear the path faster. And think hard before making your next move, because you have a limited number of moves per game.

Downs: Since it follows the same basic principles Candy Crush and other sort of popular games followed, Rescue Quest eventually becomes as time consuming as all the other item-matching games. It’s true, a good game has to take up some of your time. If it didn’t, then that would probably mean it wasn’t engaging enough to make you want to play more. But what I don’t like about these games is not necessarily that they are time-consuming. It’s that they are extremely random. When you finally clear a level, it’s not because of the experience you’ve gained. It’s just random, pure luck. That’s the main fallout with these item-matching games. And Rescue Quest makes no exception, no matter how strategical, and logical it might seem.