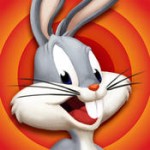 If you’re trying to find something to put a smile on your face at the beginning of this year, search no more: Looney Tunes Dash! is exactly what you’re looking for. Fun, creative, beautifully designed; it is definitely the best game i’ve played since the year started.

Ups: Looney Tunes Dash! is a level-based endless runner. Which I find to be absolutely great! After all, we’re talking about the hectic, constantly moving Looney Tunes characters, so what better way to put all this in a game, if not with an endless runner. And it’s level based, which is so cool, because it’s not about running as much as you can, faster and faster, until you can’t see straight anymore. It’s more about completing goals. And there’s always something new coming up.

Your main goal is to take Bugs Bunny Home safely, as he’s running away from Elmer Fudd. But, besides having to avoid or break obstacles along the way, while collecting coins, and other cool items, Bugs Bunny also has some other looney objectives to complete. Like catching Daffy Duck before he steals all his coins, and items. Or breaking Porky Pig’s barrel. Or being careful when Taz comes out, and destroys everything in his way, sometimes making Bugs Bunny’s job easier, other times throwing new obstacles in his way. And so on. It’s an amazing game, with really nice graphics, a fun background tune, and voices. You can never get sick of it, because there’s always something new, fun, and looney to do.

Downs: I enjoyed Looney Tunes Dash! so much that I honestly can’t find any flaw with it. It’s true: the objectives get harder, and harder to complete. But you also get a lot of cool boosts to help you out. Also, I’m not such a big fan of sending game requests to my Facebook friends, asking or sharing particular game items with them, and Looney Tunes Dash! is this type of game. But even that I can’t consider to be a flaw, because, it’s not like if you don’t connect with Facebook, you don’t eventually have enough coins to buy yourself the items you need, or get more lives to be able to continue playing the game. Maybe not as fast, but still. So, in the end, Facebook is not a must, just a way to make the game easier, and more fun to play.

I remember the first time I've played the original Sims game; I was absolutely mesmerised of all the things I could do, and control. And with the new SimCity BuildIt game, your job just got harder, and more interesting. Because now, you literally control everything in your city.

Ups: SimCity BuildIt is not about playing with dollies anymore. Here, you have an entire city to run. You’re in charge of building roads, houses, and providing the people the resources, and institutions they need. Build electric systems, water systems, schools, hospitals, police centres, and factories to give you all the materials you need to build all these stuff. And that’s not all. Your city needs a good transportation system. Landmarks, to be a powerful cultural centre, and touristic attraction. A Government, to keep things in order. And pretty much anything you can think of that keeps a city running. It’s quite a challenge. But also a good simulator for a management project.

Downs: SimCity BuildIt doesn’t offer you enough pointers to make your job easier, and give you that incentive to keep going. I like to make lists to keep things under control, and know what I have to do next. So, I find a game that constantly throws quests at me to be more catchy than one where i just run, build, shoot, or collect items like a maniac to get as many points as I can. And I felt SimCity BuildIt doesn’t guide you enough through the process.

You have an extensive Tutorial at the beginning, but then you kind of feel like you’re on your own, trying to see what else you can build, what you need to build it, and it’s more of a trial and error sort of process. And, from time to time, there are also indications of what you should do next. But I found SimCity BuildIt to be more of a game where you set your own goals, rather than a game where you have specific goals you need to follow. Now, I don’t necessarily think this is a flaw. Quite the contrary, it could be a great way to develop you management skills. But after a long day at work, you’re kind of looking for a fun, relaxing game, rather than a second job. And SimCity BuildIt kind of feels like a second job.

Brothers in Arms 3: Sons of War

For those of you who are looking for a bit more action in the new year, Brothers in Arms 3: Sons of War is an exciting shooter that will take you all the way to the fields of war.

Ups: Brothers in Arms 3: Sons of War is pure action. You go on campaigns, take cover, move, or shoot the soldiers in the opposite army when you feel the time is right to do so, destroy tanks, unlock achievements, clear objectives, gather more soldiers in your team, constantly upgrade your weapon, and so on. It feels like the real deal, and you’ll feel like an actual soldier, doing his job in the field. Maximum adrenalin rush, without the risk of actually getting hurt.

Downs: Brothers in Arms 3: Sons of War brings nothing more than any other shooter I’ve played in the last couple of months. The characters, the story, and some of the controls are different, of course. But other than that, it’s got nothing to make it stand out of the crowd. Plus, from time to time, you hear or see on the screen some suggestions like "shoot now, he’s reloading". Maybe I didn’t pay enough attention, or wasn’t fast enough, but I couldn’t figure out if those indications were intended for my army, or the opposite.

Shot accuracy is also poor. You set the target, and as you shoot, it keeps on moving higher, and higher, until you don’t know if you’re shooting what you should, or not. Maybe that’s intended to make the game more challenging, and more realist, but I just found it to be annoying. And taking cover was also a bit annoying, because it didn’t always work. Nevertheless, Brothers in Arms 3: Sons of War is still a good shooter, but not the best I’ve played these past couple of months.

Download Brothers in Arms 3: Sons of War from the App Store