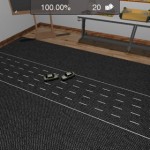 Secret Lab is a "game" based on a set of U.S. military ESP experiments from the 1960s. Testing subject to find out if they could predict the future. Do you have what it takes ?

6 components to the game

And finally Zeners...
If you have seen Ghostbusters you'll be familiar with this experiment. Zeners is the one where Bill Murry's character holds up a card with wavy lines and zaps the poor student for getting the answer wrong.

Atmosphere & Graphics
The app has 3D graphics showing the inside of a Lab, you spin around to choose your experiment. Reminds me of an adventure game from way back choosing clues on the desks.

Instructions
Seem to be totally lacking, are you supposed have ESP to know what to do ? :) I am wondering is supposed to be ironic. So I just tapped the screen a bit with each task and saw what happened.

As a Game
The experiments are kind of fun to muck around with but I think it need a little more to make it a game, make it addictive. Perhaps the Game Center leaderboards will have people challenging each other.

Conclusion
For 99c it's not a big spend and interesting from a historical point of view. I would have liked to see an iPad version or universal app as the 3D graphics should be easy to scale up.
Check out Secret Lab ESP Test now.

Have this iPhone App already ?
What do you think of Secret Lab ? Scroll down for our comment section and let us know!