Home » Adam’s Trouble Gets The Best Of You 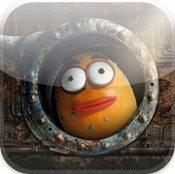 Adam’s Trouble Gets The Best Of You

Next up is a little puzzle adventure game that kind of reminded me of my Enigmo days. With Adam's Trouble you play as Adam - a strange beige creature with curiously bulging eyes who can't swim. He's trapped in a creepy sewer and needs to get top-side ASAP if he's to stay alive. Here's where you come in and your goal is thus to make Adam jump from sewer step to sewer step, opening water valves until he opens the next escape hatch that leads out of this mess.

The challenge lies in moving fast and accurate as the water level rises and opening valves will make it rise even faster. Unfortunately, the only way to open the escape hatch is to turn on a few valves, so dexterity in controlling little Adam is the main requirement.

The little curious creature is butt-naked in the sewers, and you can even see his tail hanging from his backside. Controlling him is as easy as pulling his tail and aiming in the direction you want Adam to jump. The longer you pull his tail, the higher the jump. But that's easier said than done.

When you tug on his tail, Adam will look down, his eyes will bulge out even further, and releasing it will cause him to fling in the desired trajectory. The only problem is, he needs to land on one of the sewer planks above the rising water. Put him in the water, and you start the level again.

Getting top-side is no easy task either. You're on a timer, and to open the hatch you need to open valves across the room from where you are initially. Jump from plank to plank with care, and then back to the opening that you've created in the hatch.

Being a pretty hard game to master, Adam's Trouble comes with no life limits. Instead, if you miss completing a level, you're given the option to "Try Again" and restart that level. The game has a steep learning curve, and occasional crawling creatures will try to block you from escaping the rising waters.

Graphics That Complement The Overall Theme Of The Game

The game graphics perfectly captures the mess Adam is in. The rusty sewer with the slimy crawling creatures seem to create an atmosphere that will occasionally creep you out. The music speaks for itself, and even though I'd like to see some more sewer like sound effects (different bangs on steel with a hammer and such), I'd have to give credit to the developers for one polished gaming experience.

The game has 25 levels of pure addiction built in, with each new level progressing in difficulty. The Lite version of the game will have you saving Adam in the first three levels, and even that is no easy task. The developers dubbed it the toughest game out there. The additional two bonus levels they promised will bring new enemies to face, more friends to save, power ups and some exciting new powers for Adam.

How Far Did You Get With Adam's Trouble?

Share your scores here and measure up against the community!

Have it already ?
What do you think of Adam's Trouble ?   Scroll down for our comment section and let us know!

2 Bites to “Adam’s Trouble Gets The Best Of You”