Home » Guerrilla Bob Is One Bullet-Proof Game For Your iPhone 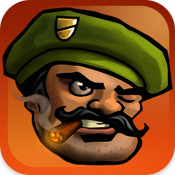 Guerrilla Bob Is One Bullet-Proof Game For Your iPhone

This one's a beauty! A true action-packed adventure shooter right on your iPhone with Guerrilla Bob. Phenomenal graphics and incredibly fast-paced game play cast this game as one of the greatest action games for the beginning of 2010.

In Guerrilla Bob you fight as the fearless mercenary as he makes his way out of desert canyons, dangerous towns and the hordes of enemies that will flow towards you, all wanting but one thing: your guts on a silver platter. But not if you can help it. You have at your disposal one kick-ass arsenal of devastating weapons to wreck havoc.

Bob is apparently in personal vendetta to kill every man standing. The plot line goes on to be a bit Chuck Norris like, with Guerrilla Bob stopping a nuclear strike that would have taken out all the baddies in one shot, only to not be denied the pleasure of killing them one by one.

Controlling your character and keeping him alive is your main responsibility. You need to master the virtual dual stick shooters in order to move faster, shoot more accurately, duck, fire and kill. Your left stick will help you move Bob, while you have to use your right stick to aim and shoot. If you're already used to playing with this type of controls, you're gonna feel right at home with Guerrilla Bob. Even if you've never played this before, the learning curve is low, and you'll be screaming as you fire in no time.

In order to avoid taking damage from baddies, you'll have to master running and dodging. Race into the background, weave through the maze of rocks and cacti and circle around to shoot your followers. It's truly a fast paced action shooter and you won't have a minute to breathe with this one.

Apparently, Bob is so macho that he has the arsenal of an army carrying around with him. The level of design and creativity of weapons is astounding, I'll give you that. You'll be able to choose between three absolutely kick-ass weapons, all three upgradeable through secret power-ups you find along your way.

First off, you have your Machine Gun. You're looking at one rapid fire and blood splattering weapon. Next up, if you get mad, pull out your Rocket Launcher. There will be no blood left after this one. Its highly explosive ammunition make for the perfect weapon when you want to do some spread damage. And if you want to get up close and personal, then fire up your Flamethrower for some deadly melee damage. Crash and burn baby!

Switching weapons is accomplished by tapping one of the three weapons icons on the bottom of the screen. Different enemies will have you switching to different weapons, to best deal with them. Hidding enemies are best handled with the flamethrower, suicide barrel huggers using the machine gun, while angry mobs can be easily dealt with by dispatching your rocket launcher.

The game will have you fighting through multiple difficulty levels (I didn't get to the end yet), but if you're counting that at the end of every level you're fighting one mean Boss, and there are 8 total, then it'd be natural to say the game has eight levels overall. Guerrilla Bob also benefits from a scoring system that will link you to an online leaderboard too, through Chillingo's Chrystal.

Every level will have you doing something else, bringing a new challenge to Guerrilla Bob. At the end of the first level, you have to weave through a canyon maze as you run away from a loading scoop truck. The third level will put you on a river raft while the bad guys take turns to aim and fire at you from the river banks.

Alternative to the natural campaign mode, you can fight with Guerrilla Bob in a Survival Mode. The hordes of enemies never end and they're meaner and badder every time. You control Bob in a closed arena environment and enemies come from every direction. Difficulty modes are accessible as well.

Combining the killer graphics and character animations with the original sounds and music, the amazing animated cartoon graphics, this is clearly how a dual-stick shooter should look like. Highly recommended and sincerely sorry I can't go into more details about the humorous lines, the unique baddies or the graphical details, but I'm off to play this one. Got to level four already and my palms are sweaty. The game just got released today, although there's been a hype around it for the last couple of months.

Have it already ?
What do you think of Guerrilla Bob ?   scroll down for our comment section.