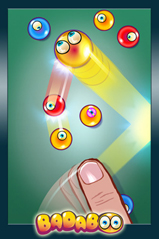 The App Store featured this week in its Top 10 Free Apps one pure pick-up-and-play funny game that's already in user favorites. The shiny cartoonish colors, incredibly pretty audio and the social networking integration tool have made Badaboo one game that's hard to put down once you pick it up.

Similar to Fuzz Friend, in Badaboo you have a big round bouncing ball with two cute eyes, which they call a Bada, that you have to flick around the screen with your finger. You have a target to flick at as well: seven Boos - similar bouncing balls with just one eye and that change color from red to blue and yellow each time they are hit with the Bada.

If in Fuzz Friend, the game had a sort of stress relief element to it, in Badaboom you're awarded points every time the Boos hit Bada, the walls surrounding the playground area or each other. You have only five flicks at your disposal, so use them wisely if you want that high score.

Of course, there's a catch to flicking your Bada like a maniac. You can get a 10,000+ highscore for just slamming the Bada around, but that doesn't come close to the 50,000+ jackpot for finishing the game (that is all your flicks) with all the Boos having the same color, and even more if you manage to match all the Boos with the color of the Bada. Keep in mind, the Boos will change color only when they hit the Bada, and the Bada never changes its color. And this is the tactical part of the game. By my guess, if you want stress relief and lots of rainbow colors flying around the screen, then you'd better forget that high score.

The viral element of the game is its Facebook Connect function that lets you post scores and challenge friends on Facebook to an ever-so-cute game of Badaboo. Perhaps one annoying feature of the game is that after flicking your Bada you have to wait for things to quiet down, all the Boos to stop and all, in order to have another go. I can see the point of this when playing tactical, but perhaps an option to turn this off would come in handy for users. The audio is purely brilliant, and the cartoonish graphics are simply cute. Badaboo is free to download from the App Store.

Have this iPhone App already ?
What do you think of Badaboo ? Scroll down for our comment section and let us know!

One Bite to “Badabing, Badaboo!”