Home » Put Your Dukes Up With Boxing Fighter 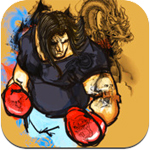 Put Your Dukes Up With Boxing Fighter

In this arcade-style boxing game from Morning Egg Inc., you need to fight your way to the top of the championship, while facing 100 different boxers as you progress through the ranks. If you were ever into games like Mortal Kombat along with other classic examples of underground club scene fighting of the 90's, then you'll feel in the right mood with Boxing Fighter for the iPhone.

Start a virtual career as a boxer

As you start up the game, there are three choices for you: Fight, Career and Vs. In Vs. mode you will need a real opponent to play against over WiFi. The Fight mode pits you against a computer opponent in a quick one-time fight. The Career mode is where the magic happens.

In Career mode, you'll have to fight through 100 boxers to the top of the championship. This isn't as easy as the one-time fight mode, as opponents increase in difficulty. Thankfully, your ranking goes up as well after every fight you win, as does your bankroll.

To start Career mode, you'll need to go through some quick customization of your fighter, with options including his name and his appearance (pants, gloves, shoes, hair color, etc). After that, you're automatically given the rank of 100 and you'll have the option to choose what to do next.

You can start to fight against those 100 opponents. Each opponent is one rank better than you, so you know you're in for a fight. You can train, as after each match you get a couple of training points that you can put towards your various skills (face defense, belly defense or power). Each fight you win also gives you cash rewards, that you can spend in the shop for better gloves, better shoes, and various accessories.

The other section is Events. You'll need to start low with these in order to be able to win a couple of matches and get your ranks high. The first events you can participate in are mostly underground fights, while the goal is, of course, the championship.

As for the fighting itself, there are a few catches here as well. You have four virtual gloves, each in one corner of the screen, and each representing one hand (left or right) and where to strike (face or belly). You can also do various combinations of these, like sliding a glove while punching to achieve and upper cut or a hook. The Help screen does a great job at explaining the various options.

Additionally, you'll sporadically get certain powerups that you need to drag onto your fighter to gain them. Some will give you special punches (electric punch, fire punch) which will enable you to do some really damage to your opponent, while other are aimed at getting your health and energy up.

Speaking of which, there are two things to pay attention to while fighting: the two bars at the top of your screen. The red bar is your health - get it depleted and you're down on the floor. The blue bar is your energy - get it to the minimum and you won't have any more energy to punch your opponent. The energy bar self-regenerates, as long as your not in attack mode and you're just staying away from your opponent.

If you're ever down on the floor, all is not lost. Quickly touch the green dots that appear on the screen and you'll get back up, along with a portion of your health. If you don't manage to touch all the dots in a certain period of time, it's a knock out. One thing to note here, is that your AI opponents never seem to be able to touch those dots, so chances are if you knock them down, they'll stay down.

All in all, Boxing Fighter offers a good amount of gameplay, coupled with great artwork and some intense sound effects.

Have this iPhone App already ?
What do you think of Boxing Fighter ? Scroll down for our comment section and let us know!

One Bite to “Put Your Dukes Up With Boxing Fighter”