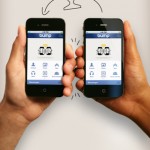 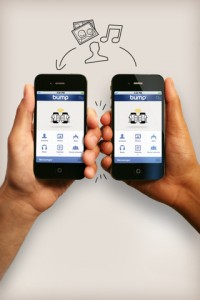 Remember when Apple was announcing their 1 billionth app download from the AppStore? It was over a year and a half ago, and now more than 10 billion app downloads later, the 1 billionth app is still strong and our opinion hasn’t changed. Bump is a must-have!

For those not familiar with Bump and still using business cards or paper napkins, meet Bump - the iPhone app that makes sharing contact information a breeze. All you need to do is run Bump, a free download, on both devices and simply “bump” the two devices together. The application will recognize the two locations and ask for permission to connect with each other. When granted, you can easily share your contact information on the fly.

A whole other ball park

Over the course of the year, Bump has continued to evolve. The initial release allowed users to bump and exchange contact information only. Now, the sharing options for Bump have evolved at a steady pace. You can now share photos, apps, music, chat messages, contacts or calendar events. You can become friends on Facebook via Bump, follow each other on Twitter and Linkedin.

Initially, Bump was available for the iPhone, but now you can bump iPhones, iPod Touches, iPads and even Android phones together. Our initial tests involved two iPhone 3Gs, but now, I’ve taken the liberty and tested Bump on an iPhone3G and HTC Wildfire (Android powered).

It’s also important to note that Bump won’t actually share apps or music, but rather when you bump two devices together, the receiver gets a link to the app in the AppStore or a link to the Youtube song or iTunes preview, where they can also purchase the song.

Something I really enjoyed was the sharing of photos between the two devices. I could quickly see the potential uses cases for this. Imagine you’re at a party, you’re snapping pictures of your friends and one comes up to you asks you to send the pictures to him. You both fire up Bump and instantly share the pictures with him. Fast, reliable and fun!

Speaking of evolving, the Bump user interface has also grown quite a lot. The black-only interface one year ago worked fine, but now Bump has taken a more enjoyable approach to the graphics side of the app. The mechanics themselves have not changed much, which is perfectly fine.

Bump is a clear example of an app that started with a steady infrastructure and a clear idea and has evolved over time by building on top of what the users already loved, instead of constantly starting over.

It will definitely be interesting to see how Bump will perform one year from now and we’ll be right here to tell the tale! Until then, enjoy bumping into one another! We are!

Have this iPhone App already ?
What do you think of Bump ? Scroll down for our comment section and let us know!