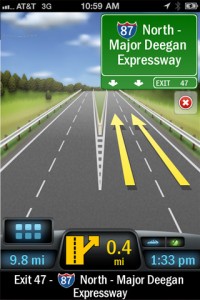 This is the first navigation app I have used. Normally I rely on mapping out my drive on my computer before leaving or using the iPhone's native map. In testing CoPilot I found that it fills the gaps of those methods. Overall it was very simple to use the various features and to customise settings. Nearly every setting that I might want to change could be whether practical or just for preference, and I appreciate that. CoPilot offers quite a few ways to improve navigation with lane assist arrows, Real Signposts, and CoPilot ClearTurn(tm). Text-to-speech, day & night mode, drag routing, and alternate routes features successfully aim for usability.
I encountered fun features and some small disappointments.

What I Think
If CoPilot strives for ease of use and customisation then it hits the mark. CoPilot allows me to search more effectively than I could with the iPhone's own map. For the most part its features are helpful, organised into their menus instinctively, and very obviously titled. The directions are displayed and spoken clearly. I especially like all the options CoPilot gives me to make the navigation system as useful and non-irritating as it can be. An annoying navigation system can make a trip intolerable (or gets turned off,) but I am pretty sure that anyone can find settings in CoPilot to be pleasantly guided to their destination.

Have this iPhone App already ?
What do you think of Secret Lab ? Scroll down for our comment section and let us know!