Home » You can’t hide, but you better run!

You can’t hide, but you better run! 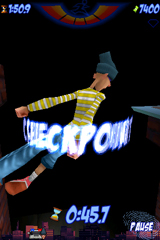 We've heard a lot of Glu but never had the chance to get our hands on one of their games for the iPhone so far. But we couldn't have picked a better time, and game, to do it. Cops & Robbers, released just this month, is one amazing action-arcade game that will provide you with a few-hours straight of fun and excitement.

With Cops & Robbers, you're dealing with a cartoon-style Parkour game where your goal is to basically run away from the cops. Each of the levels is a race against the clock between you (the robber) and the cops that are right on your tail. Your character is in constant motion and runs automatically and you're left with just stirring him right, left avoiding obstacles, jumping over them and on and to roof tops. If the cops catch up with you because you've gotten blogged down by a sand pond, a trash can or that old lady, then you end up behind bars.

As soon as you get into the game, you see the movie clip that tells you the plot and then you plunge right into the game, starting with the first of the nine levels. You can't get to the next level until you hit the target for the current level, and each level features four challenges to beat, which should give you something to think about when deciding whether 9 levels will simply not do.

When you start off the level, your character will set off running immediately at a constant speed. There are several speed boosters along the way (in the form of doughnuts) that will give you instant speed for a limited amount of time. With control out of the way, you have to steer and jump whenever necessary. It's literally a piece of cake with Cops & Robbers, a simple tilt of your iPhone to the left or right will do the trick most of the time. Tapping the screen will get you leaping over obstacles. Tapping the screen also controls swinging off polls and climbing buildings. It's really easy to get a hang of, so in no time you'll be able to really savor the run.

Each level requires you to steal a diamond which is usually hid behind a lit windows somewhere in the game level. Getting to it requires running, jumping, swinging and climbing. Actually getting it requires you to play a little safe-cracking mini-game. And then, when you thought it was over, you still have to make it to the end of the level safely. If you get caught is back to the drawing board.

After completing the game as a Robber, you've unlocked Cop Mode, where you play as the Cop running against the ghost of your Robber, trying to beat him to the end of each level. As with any Parkour game, it's a matter of timing your moves and jumps just right. In the later levels, you'll have to master these moves because the challenges come faster and closer together.

The only complaint we have with this game is the somewhat rough textures and renders the game developers created for Cops & Robbers. Clearly the game play and style is overwhelmingly natural and addictive, but the graphics would need some work to make it a home-run.

The game is available to purchase from the App Store at the price of $1.99, which gives you access to everything Cops & Robbers can offer, but if you're still undecided then just download the free lite version to get a feel for the game.

Have this iPhone App already ?
What do you think of Cops & Robbers ? Scroll down for our comment section and let us know!