Home » Can You Defend The Chicken Against The Snake? 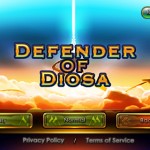 Can You Defend The Chicken Against The Snake?

Defender of Diosa is a truly complex game. While it is built on the ideas behind the tower-defense game type, you will have to think fast, act faster and strategize a lot in order to beat this game. Why? What can be so hard about defending a chicken with a crown on its head? Read on, my friend, things are not what they seem.

The plot of Defender of Diosa is a bit hard to understand, lest you read the App Store description for the game. Apparently, there are two goddesses in this fantasy world, and they are at war. You are the leader of Diosa Ada (the chicken) and you must protect her from the minions sent to destroy her by her arch-nemesis sister, Diosa Iris (the snake).

If the plot line discouraged you a bit, don’t let it get to you. I promise no disappointment lies ahead, as Defender of Diosa is one of the coolest games I’ve played on the iPhone yet.

Moving on to what’s really important in the game: how to control your army and how to defeat the enemy. First off, you need to understand that this game is based on a tower-defense strategy. Enemies come in from the left side of the screen, almost always in large packs, and you need to position your army (two or more) so that you knock off every attack before it reaches the goddess’ golden chariot.

Sounds simple enough, doesn’t it? But this is where the developers, I think, did an amazing job developing the genre. When you first start any level, all your army is comprised of citizens. These don’t stand a chance against the armies that are coming their way. So you need to assign jobs to them, which you do by tapping and holding on a citizen. From the menu that pops up, you need to select the unit type you’d like your citizen to be.

The first few levels only allow you to select the Infantry unit. As you move through the levels, you unlock more units, making the game a blast. In total, there are 7 unit types available: citizen, infantry, archer, magician, knight, axe warrior and assassin.

You can position your units alongside the screen, keep them together or place them at strategic positions to repel attacks. Enemy units will come in packs, but not all will stop to fight your one unit. Some will move on towards the chariot. That’s fine, because your units are also mobile. You can tap and drag your unit to move it to a desired location at any point in the level. Tapping the unit once will shift its attacks either to the left or to the right: neat for attacking enemies from behind and corner them.

To recap so far. You can assign jobs to your units and change them during the level at any time. You can position and reposition your units as you wish. But that’s not all. As with the enemy units, you are not indestructible. Your units will lose health with every attack. To recover it, you need to put that unit to rest. To do this, you drag the unit onto the pillow-looking icon on the lower-right side of the screen. After a few seconds, the unit is fully recovered and ready for battle.

If you do lose a unit, you can use the goddess’ power to bring it back to life. You can also use certain spells to attack the enemies, like throwing lightening on them, which takes some of their life and freezes them at the same time.

These spells are limited in use, because they use up the goddess mana. If you run out, you can’t do any more spells, until it recovers. Having citizens present on the battlefield will speed up that recovery, but will certainly not help you in defending her.

With every level completed, you earn coins. You can use the coins to upgrade your units, the resting room or the goddess’ powers. The game offers over 66 upgrades to help you craft your armies into the ultimate destructive force.

I would love it if the game offered GameCenter integration. The graphics and the sound (love the battle music by the way) are fantastic. But there’s no way for me to brag to my friends about my scores or unlock any achievements.

The game features over 70 levels, 40 in Adventure mode and 30 in Quest mode, with a lot more to unlock. This the most fun you’ll have with a game, any day. Guaranteed!

Defender of Diosa HD is also available for the iPad.

Have this iPhone App already ?
What do you think of Defender of Diosa ? Scroll down for our comment section and let us know!