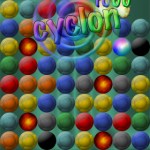 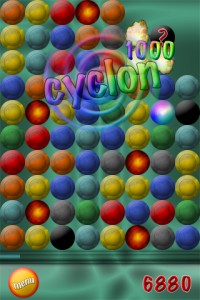 It should be obvious to everyone what the goal of this iPhone game is. You need to connect three or more ball of the same color in order to eliminate them from the board. Balls will continue to fall from the top of the screen and it’s up to you to arrange them via Tetris-style controls so that they fall in the right place, preferably next to like-colored balls.

You can speed up balls as they fall down by swiping downward on the screen.

In order to align the balls to determine where they land, you need to slide your finger anywhere on the screen in the direction you’d like the ball to move horizontally. This is all fine and dandy, but the ball itself moves but one space with each swipe, so bringing the ball from one side of the screen to the other will take up to 7 swipes, which is hard to accomplish in time even with the board empty.

Some might say this is what makes the game exciting. I think this is where the game lost me. Fallin 2 is all exciting without the need to make it that much more difficult. If you absolutely need to move the ball one space at a time, give me some different controls, like dividing the screen in half, the right side moves the ball right and the left side moves it left. Or at least give me the option to choose between the two controls.

To recap, there are 7 colored balls of which you need to connect three or more (the more you connect, the bigger the multiplier) in order to clear the board. They way you do this is by swiping left or right in order to align the ball with where you want it to fall, or swiping downward to speed it up.

You can also choose between 5 ball themes, adding a notch to the graphics score.

I couldn’t help but wonder whether there was an initial release of Fallin 2, Fallin 1. And yes, there was. While I haven’t downloaded this one to try out, I must make some notes to my readers. There isn’t that big of a difference between the two, especially graphics and control-wise. Both games seem to be using this rather slow swipe-left-right to move the ball, and both use simplistic graphics. Fallin2 has the upper hand though through the use of special balls like the ice ball or the fire ball. Also OpenFeint integration makes it easier to compare scores.

Bottom line, Fallin 2 seems more like Fallin 1.1, an update, rather than a redesign effort, and by redesign I don’t mean just graphics, but controls as well, which I personally found frustrating.

Have this iPhone App already ?
What do you think of Fallin 2 ? Scroll down for our comment section and let us know!

One Bite to “Connect Three With Fallin 2”