Home » Run And Jump In MotionRunner

Run And Jump In MotionRunner 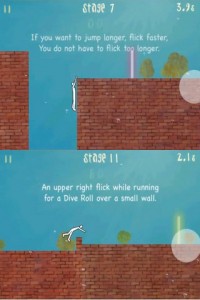 Timing is everything, and MotionRunner will prove that if you decide to give it a chance. This iPhone game was designed to be as simple as possible (and perhaps that’s where it fails, more on that later), with just three controls, and you should be able to play it with just one hand. It goes for 99 cents in the AppStore.

At its core, MotionRunner is a kind of running Stickman game. You control a man that wants to get from one side of the landscape to the other, while breaking through all the yellow obstacles, on its way to the final red one that’s also the end scene.

You can walk, run and jump, and everything is basically achieved by flicking the screen. Flick once for the man to walk in the direction you want. Flick again once he’s walking and he’ll start running. When you get to a hole in the landscape, you can jump to the other side by perfectly timing your jump. And you jump, you guessed it, by flicking on the screen in the direction of the jump. You can control the length of the jump by calculating the angle of the jump (flick upwards for a higher jump) and the speed of the flick (faster flicks will give you a longer jump).

The little man (which looks like it’s made of white blobs) will trip over everything if it’s running. So if you’re in running mode and you see a small brick, jump over it, or the man will just trip and stay down until you flick him on his feet. If you’re walking on the other hand, the man will automatically stop when it gets to obstacles like bricks in the landscape or those holes you need to jump.

Once you get a hang of these simple controls, it’s all a mater of timing your jumps so that you’re always running and never tripping over stuff or falling into holes. Be careful to break through all the yellow obstacles and do it as fast as possible. You’re being timed!

So what’s so interesting about this?

MotionRunner is great game, but you’re likely to finish it in about 20 minutes. You only have 20 tracks to complete, with the last 5 being the most difficult.

The developers promise an infinite mode coming in the next update, so that’s going to spice things up a bit. Competing in Game Center is another addition I would welcome. Introduce some type of items you need to collect and the simplicity of the game combined with some intricacies will make it a winner.

Right now, MotionRunner is great for the first minutes of it, but you’re bound to want more and put it down fast. Not because it’s not entertaining, but because you finished all the levels. In my opinion, it’s not worth 99 cents in its current state. With future additions though, it might be worth even more than that. It’s definitely something I’ll look out for.

Have this iPhone Game already ?
What do you think of MotionRunner ? Scroll down for our comment section and let us know!