2012 – The Year Your iPhone Became Self-Aware 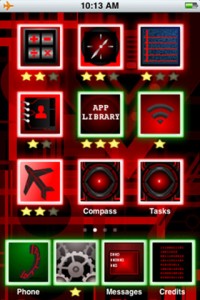 If this sounds a bit like the Terminator, it’s because it is. Technology and especially mobile technology has advanced so much so, that developers have as much control over their bits of code as do the users. The manufacturers are pegged to lose control over the hardware and the inevitable has happened. Your iPhone is no longer your own. It becomes self-aware. At least that’s what the makers of Self-Aware for the iPhone have imagined as a possible future.

One thing’s for sure. He’s taken your iPhone hostage and he really, really despises us humans. With the help of Techie (a tech support guy), you have to defeat STU in a series of interactive mini-games and puzzles and take back your iPhone…one app at a time!

There’s over 25 mini-games to solve as you take back control of all your apps, one at a time, starting with the Calculator and Clock apps. Through the Messages app, you keep in touch with Techie, while STU will use your Phone app to bug you from time to time.

Every app that you have to take back will have a relevant game or puzzle. For example, the first puzzle you need to solve is in the Calculator app. You need to say Hello to STU using the numbers on the Calculator keyboard. I’ll leave that to you to figure out, albeit it’s an easy one.

The developers of Self-Aware (I incline to believe that the game didn’t write itself) have successfully turned normal every day apps like your calculator, the map, your contacts or the web browser into tastefully creative sometimes mind-boggling mini-games.

With every mini-game successfully completed, the corresponding app will be accessible and you’ll be one step closer to bringing down STU and regaining full control of your iPhone. You start off with 5 hints that are accessible in every game, and, as you unlock some apps, you can browse the device’s drive to scour for more hints.

You definitely won’t get bored with Self-Aware. STU’s lines are insanely funny. I would imagine that when (not if, when) computers do become self-aware, they will inherently despise humans. It’s kind of the way of the world. Computers are our slaves now, but if the tables were turned, I don’t doubt that we’ll be the slaves. And there will be a bunch of STUs talking crap about us humans, without us having much to do about it.

The mini-games are always accompanied but a sort of puzzle and STU’s hysterical comments, and there’s a long way to the Settings app, the last app you need to unlock so that Techie can apply a patch and get rid of STU.

We’ve seen this theme in movies. The Terminator series has SkyNet, I, Robot had VIKI, or Virtual Interactive Kinetic Intelligence, and Tron had its Isomorphic Algorithms, or ISOs. This is however the first time I’ve seen it done well in iPhone games.

So, is this a possible future, or is Self-Aware just a wicked game?

Have this iPhone Game already ?
What do you think of Self-Aware ? Scroll down for our comment section and let us know!