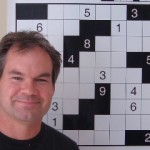 We've managed to get a hold of the developers behind 1 to 25 and they gracefully agreed to grant us a couple of minutes so we're brought down the Spotlight on them. The developers behind Syndicated Puzzles are Jeff Widderich and Andrew Stuart. It seems they are really into developing some awesome games and they've really poked the other developers that are just in it for the money. Here them out!

1. Tell us a bit about Syndicated Puzzles, the values and team that hold it all together. What drives and motivates you?

Jeff: I am the mad scientist type that pulls creative stuff out of nowhere. Andrew Stuart is a legend in the puzzle industry he is the element that turns my creativity into a manageable product. A great combination that is hard to beat!

2. What does it take to succeed in the marketplace ?

Jeff: Str8ts is a great example how inflexible the business world is. 250 million Sudoku players have been desperately waiting for two years for the next big mass market puzzle rival to come along. Str8ts actually received more resistance than it did acceptance. Why, because the puzzle world was still making really good money off Sudoku. So it was quite obvious the only way to succeed was for us to bring the puzzle to the people. No one else was going to help the process.

3. What made you develop for the iPhone?

Jeff: It is by far the fastest way to bring a viable product to the people. The word viable is the key ingredient here, otherwise you will disappear as quickly, as you appeared on the iTunes store. Str8ts is as good as Sudoku not necessarily as a puzzle but as a mass market product, it is an equal. It has every single attribute that Sudoku has except for one, the Japanese name.

4. You offer a different and compelling vision for puzzle gaming for the iPhone. What else sets you apart from competition both in the Appstore and the general market?

Jeff: We only have creativity. It will be really tough for us to top Str8ts but we are up to the challenge. Domino Dice will be out the end of this week it should really help us get instant recognition as well. One thing we really want to use is simplicity. It is so beautiful, when executed correctly, our game called 1 to 25 is a perfect example of that style of puzzle. It is so easy to understand but hard to play. I am a product person that is the pathway to success great product. If you purchase an app from us we will have put our best effort forward.

5. With the new SDK released, a whole new world opened up for developers such as yourself. What can you expect from the market and how will you respond to more expectations from your puzzles?

Jeff: Puzzles are supposed to be black and white and filled in with a pencil. We are hoping to keep it simple. I am really counting on all the other developers to go crazy with all the bells and whistles so Syndicated Puzzles stands out with it's simple approach to game and puzzle design. Our trademark.

6. What was your favorite thing about designing for the iPhone and iPod Touch? The biggest challenge?

Jeff: We had a lot of fun getting these apps ready. Andrew had all the logic and the games pre-programmed so all we needed was the structure of the app and it all came together quickly. The iPhone really is a great tool to bring ideas to life. It really forces people to design and create differently. The most interesting thing to me is how much of the functionality of an app is actually hidden and never seen by the end user. Functionality and ease of use are the great possibilities that should be in more app builders tool boxes.

7. What apps do you have on your iPhone or iPod Touch? What’s your favourite?

Jeff: I dig It is great! I actually feel like I am in the excavator. Paper Toss is the best app to hide the code and allow players to enjoy what the app was made for. To be honest the best creativity is really happening outside the gaming section of the iPhone.

Jeff: The purge button! First off in game design the word purge is taboo. I think we had six buttons doing all sorts of things. I got so frustrated with the buttons that I told Andrew they have to go. The end result was one button that does everything. Now that is what I am talking about.

9. What’s next for Syndicated Puzzles?

Jeff: Just to show off our flex-abilities we are releasing a word game that will allow players to show of their skills. A word game where you are up against the rest of the world, filling in the same puzzle using the same letters as everybody else. The entire element of luck has been removed. Sorry folks, nowhere to hide in this one!

We thank Jeff and Andrew for their input and their dedication to creating great puzzles. We're already catching on and we have a review of their latest game Str8ts ready for you to enjoy and we're also looking forward to Domino Dice taking its place on our iPhones! Thanks again and we'll be keeping an eye out for games of the Syndicated Puzzles trademark: simple and to the point! 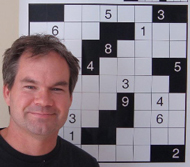