Home » A Great Game Of Ups And Downs 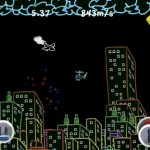 A Great Game Of Ups And Downs

Ah, I remember the cool and addictive flash game where you had to control a helicopter and fly it around the screen and avoiding obstacles. You had to continually click your mouse to make it fly. The reason it was so addictive was because I couldn’t really control it for more than 20 or so seconds, so it was a race against myself to beat a record.

While I’ve seen this type of game in the App Store before (I’ve even reviewed one here), I must say that Doodle Plane has a few more tricks up its sleeve.

Apart from being able to choose between a bunch of different planes you can fly, you also have 10 worlds to fly it through. Once you start the game, hitting play will get you to the first world: New York City.

So you have your plane. And you have your world. Now what? There are basically just two controls for you to master. With one button you control the plane’s speed (on the right) and with one button you control the plane’s height(on the left). And you need both if you’re going to be flying. In other words, your plane won’t be able to fly if it doesn’t rise from the ground and it won’t be able to advance if it doesn’t pick up speed.

Knowing when to slow down, when to let the plane fall and when to accelerate and gain height is essential to Doodle Plane.

Once you’re off the ground, you need to steer your plane through a maze in the sky. Avoid everything at all cost. Buildings, clouds, the sun, other planes, helicopters, witches, bombs and so on, even the tinniest bird will take your plane down.

Consider this the end-level “boss” you need to defeat and consider yourself warned! It’s not an easy feat to accomplish.

10 worlds to fly your planes through

If the Big Apple is a pretty easy level, what follows won’t disappoint. You’re going to fly your plane through the seas filled with pirates, across Egypt, over mountains or in Space. All the levels are (duh) doodles of different neon-like colors on a black screen. The animations are sleek and fast and the sound fx very much in tune with the overall theme of the game.

One problem I’ve encountered was the constant game crashes. After first installing the game, it wouldn’t get past the loading screen. I tried several times before deciding to restart my iPhone and give it another shot. After letting it cool down a bit and restarting, I still had issues getting past the loading screen in Doodle Plane. I got in I think after my third attempt. It may be just a bug that affects only the iPhone 3G.

Have this iPhone App already ?
What do you think of Doodle Plane ? Scroll down for our comment section and let us know!