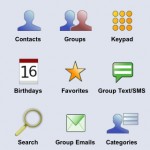 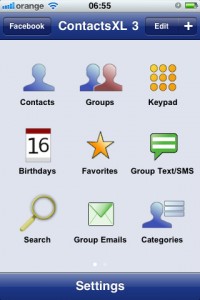 It should be clear by the end of this short review that ContactsXL for the iPhone is one of the most complete contacts manager applications available on the App Store. It packs a few handy features like contacts sorting and syncing with Facebook, but there’s more than meets the eye.

Promoting itself as a full featured contact manager, ContactsXL may very well have all that you need to organize your contacts, plus a few features you didn’t even know you needed. It’s of course up to you if actually do need them. For me, ContactsXL seemed like it wanted to pack in too many things at once, but what saved it was that nearly every feature is fully implemented and they work great together.

Too many features for Average Joe

To go through a full-fledged review of all the features that ContactsXL packs would be beyond the scope of this review, but it is worth noting them down. So, in no particular order:

Pfew, that’s a lot. I would like to take a few words to go through what I though were the most important and useful.

ContactsXL lets you organize your contacts into groups, either by creating a group and adding contacts manually to that group, or, by creating smart groups. Smart groups work based on rules that you define. Contacts are added to that group automatically, as they fit within your rules.

The rules you can set are pretty wide or they can be quite narrow. A good example that I used was creating a Smart group that I named “Designers” and where contacts that were designers were added to. So how did I do that? Honestly, it’s not me, it’s just the app. I merely set up a rule saying that any contact that had the word designer in its Job field should belong to my group.

Similarly, you can create smart groups that contain only contacts that have a @yahoo email address. Rules can be combined, and this is what makes it so beautiful. Very cool feature!

Unlike native apps that require you to add contacts one by one, you can set up groups and email them or text them with one touch. Of course there are other apps that do group texting much better, but if you’re not the adept of having 10 apps for 10 things and would like an all-in-one, group texting with ContactsXL works as expected.

If me listing those features above wasn’t enough for you, ContactsXL packs some more. The regular Contacts section of the app will display the contact profile picture next to each name, where available of course. Flip your iPhone in landscape mode and browse your contacts in Coverflow mode, by flipping through the pictures of each contact.

It’s not all sunshine

As I said before, the features are fully developed and stable. It’s clear a lot of effort has been put in the development side. But too little of this effort has transpired in the user interface design and elements. While you may be used to the home screen (from Facebook’s own app), once you go into a section, things are a bit messy with the navigation. I really wish they had sticked with a full-sized tab bar at the bottom for displaying the additional sections. The buttons they have now are really small and hard to touch. A lot of the other user buttons are way too small to tap too. I hope they’ll put in some time into creating a better user experience for the users.

Have it already ?
What do you think of ContactsXL 3 ?  Scroll down for our comment section.