Home » Stack ‘em Up, Stack ‘em High With Dice Pile For The iPhone 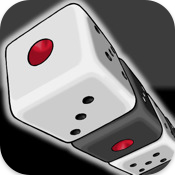 Stack ‘em Up, Stack ‘em High With Dice Pile For The iPhone

To keep it simple and to the point, Dice Pile is all about throwing dice in the air so to have them land in the designated area to form a pile. The bigger the pile, the higher the score. Plain and simple, yet so utterly addictive. The game grows on you from the first few throws and I've been having a blast with it for the past few days.

A Simple Physics Engine Determines Where The Die Will Land

Upon starting the app, you'll see a minimalistic interface that launches you straight into the game and its simple mechanics. To throw the die, simply pick one from the pile on the left of the iPhone, press and hold on it and flick it off into the air towards your right. The designated area is marked off neatly on the right, and even if the first few shots will fall short of target, simply re-address the speed and angle of the flick and off you go pilling up dice.

The interesting thing is how the die will flip a few times, depending on how exactly and where exactly it lands. If it happens to fall on one of its corners, it will bounce off a few times before it comes to a stand. If it falls on a smooth plane, then that's pretty much its ending location. This determines the part that luck plays in the game, but I don't think the physics engine has to deal with this, but rather a randomization of the instances of how the die will land.

There is one thing I would like to object to here. The game works fine when the die falls on a corner, with its two-three bounces around, but when it falls on a smooth plane, then there's not much realistic movements to it. It seems like the die will stay glued to that spot, no matter if it's almost falling off from the die that's on top of. I guess this would be my main objection to an otherwise very well calculated and realistic game.

More Ways Than One To Throw The Dice

Dice Pile has two game modes: Score Mode and Chain Mode. In the Score Mode, you have to try to score as much as you can, by throwing the 18 dice you have at your disposal. In Chain Mode, you earn a high score by completing as many consecutive successfull throws on target within 60 seconds. If you miss three consecutive shots and the dice fall off target, then you've broken the chain, the stage is cleared and your score is reset.

How To Score With Dice Pile

There are a set of socring rules to watch out for of course. The target zone is divided into "imaginary" layers, with the center being the highest score available. So the closer your die will land to the center, the higher the multiplier. When dice are piled up, the face value of the dice are multiplied with each other. So stacking a 5 on top of a three will earn you 15 points. Luck begins to play a more important role in scoring with Dice Pile, as I believe the face value is also determined in a random manner. Correct me if I'm wrong, though.

Stacking as many dice on top of one another will therefore have you score higher, as you're multiplying all the face values of all the dice stacked.

The game is designed by the company that did Mach Ball, and apparently Dice Pile came out first and was a huge success. Sadly, it's only now that I've managed to get my hands on it. Presumably the game was launched in Japan and was numero uno there for some time, and it's been available on the American AppStore of recent.

The game sells at $0.99 in the AppStore, but we're offering one free promo code as part of our Christmas giveaway.

Have this iPhone App already ?
What do you think of Dice Pile ? Scroll down for our comment section and let us know!.