Home » Put Your Mind To The Test 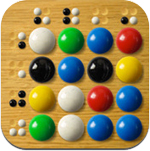 Put Your Mind To The Test

You don’t have to be a secret agent to play this code-breaking game. I have personally played its easier, older counterpart, the classic Mastermind game, where you need to guess the combination of differently-colored pebbles in a certain number of tries. Double Mind is a more advanced way to play this. It is based on the Mastermind concept, but adds a second dimension and two more interactive ways to play it.

How to play Double Mind

There are three game modes in Double Mind, but they all follow basically the same concept. Your task is to guess a secret color code, formed out of 9 pebbles, neatly arranged on a 3x3 grid. You start out with the empty grid and you can fill it with pebbles of your choice. Fill the entire board and guess the solution.

You need to combine this information and make an educated next guess, moving you closer to the final solution. You only have four guesses to make and you can use your previous guesses as guidelines for your next one. How’s that for a brain-twister?

The classic Mastermind concept features a single row of four colors and 10 guesses. In Double Mind, you start with a 3x3 grid and four guesses. As you progress through levels, you can increase the difficulty of the game by adding more rows and columns to the grid and by adding more colors to the pebbles. The number of available guesses also increases.

But Double Mind also has two more aces up its sleeve. Apart from this classic game mode, you can also play Swap and Shift.

In Swap, you have to guess the hidden combo, but you start with all the right colors positioned randomly on your 3x3 grid. Mr. Kobayashi (The Usual Suspects - one of the greatest movies of all times) plays as the computer and you have to beat him to the answer. You and the computer start with different solutions, so pay no attention to what he’s doing. Concentrate on your end and guess the right solution before he does to win one.

In Shift, one of the most interesting of the three, you play a game of one-dimensional Rubik-cube. You start with a 3x3 grid, with all the pebbles shuffled on the board. Your task is to imitate the final solution, which is shown. You need to shift the pebbles up, left, right, down, just like a Rubik cube, in order to arrange the colors just like in the solution. You again play against the computer, only you don’t take turns like in Swap, but rather it’s a continuous play, with the game ending when one of the two reaches the solution.

The little things that make it worth it

There are a couple of neat shortcuts that you can take throughout the game to make your life that much easier. You can pre-fill and refill the initial board with random pebbles. You can select an area of the grid and fill it with the pebbles from a previous solution with just a tap. Double-tapping on a pebble will show that you think that it’s definitely in the right position. It’s all these little things that make Double Mind a great game.

You know I rarely complain about such things. But with Double Mind, I think the game is 100% worth the trouble of optimizing its graphics for the iPad. Sure, you can play it on the iPad, even go 2x and play it full screen, but the nice graphics on the iPhone will simply pale on the iPad. I’m looking forward to seeing it optimized for my iPad2. Double Mind is one of those games that deserves it.

I’ve played more game than I care to remember on the iPhone. More than I’ve ever played on a computer or my old Nintendo combined. But few of these games have provided me with such a high replay value. With these different but equally challenging game modes and the fact that you can continuously increase and adjust your difficulty as you go along, Double Mind gets to be in my Hall of Fame! Definitely the logic puzzle brain-twister I was looking for!

Have this iPhone App already ?
What do you think of Double Mind ? Scroll down for our comment section and let us know!

One Bite to “Put Your Mind To The Test”