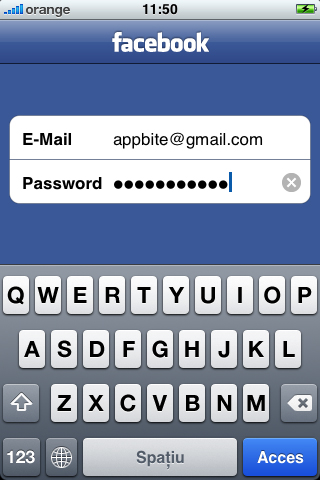 Almost one year after its launch on July 10, Facebook's own iPhone and iPod Touch application still ranks pretty high in the App Store's Top Apps. Following their release of their iPhone-customized webapp, which quickly became a bookmark on users' home screen, a very usable site, filled with all the rich functions and important functionality features, the acclaimed social networking site launched a its own native app to provide users with a mobile directory with rich information about your friends.

Facebook for the iPhone offers some important features that were missing in their webapp, while disregarding some of the crucial things that came with OS 3.0. You of course have all your friends and their info and profiles at the tap of a button. You of course have the possibility to take pictures and upload them straight on Facebook. We're also looking at a whole bunch of features like notifications, news feeds, a people search function, the almighty wall, access to your Facebook Inbox and respond to friend requests. One crucial development was the built-in chat feature, so you can send instant messages to online Facebook friends.

Their native app makes it easier to keep track of all your friends. Simply move over to the "Friends" tab and their you have them: all laid out nicely in a list you can order as you like it. Browse through and once you tap on the friend's profile, their you have it. All the contact information at your finger tips. Techcrunch's own Mark Hendrickson said the native app *almost* replaces his contact list on the iPhone. And if you and your friends are all avid Facebook users, then it pretty much does, since you'd be hooking it up with every contact information possible. But other than that, your non-Facebook contacts stick with the Contacts on your iPhone.

Pretty hot so far, but what's missing? Well, with the new OS 3.0 update Facebook's dev team seemed to have missed the most important, most acclaimed and oh-so-expected Push Notification Service, to keep you up to date with messages as they come in. It is perhas the most important function the developers have to be aware for their already-released apps and future ones as well. Facebook seems to need to find a way to also get developers involved, and release their app platform for the iPhone and iPod Touch as well. Before we take a plunge and give this one a score, we're anxiously waiting for their 3.0 update, to make us of all the new APIs available.

Have this iPhone App already ?
What do you think of Facebook ? Scroll down for our comment section and let us know!