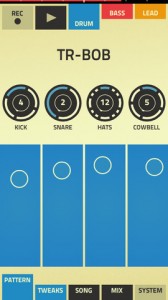 I don't know about you, but when I was young I believed that I could become anything I wanted. And back then, I really wanted to become a rapper. Hells to the yeah, yo! So I tried my hand at creating some beats with Fruity Loops, but everything was so wickedly complex that I soon gave up. It's only now that I'm older that I realize it wasn't me. It was the software. And it's because of Figure that I can say proudly: I'm not a rapper, but I can pull out some nice beats with just my iPhone. So if you have a couple of minutes and want to bust out some nice grooves, check out Figure on the AppStore!

Figure is an iOS app that lets you create music. Pure and simple. Open the app and you can immediately figure out (no pun intended) what you have to do. The app consists of three instruments: a drum machine, bass and lead synths. Combine these to create your tune. In case you're wondering, no, you don't need to know much about musical notes, or tempos and the like. If you can feel it, then Figure lets you touch it to create it. It sounds corny, but that's the deal.

The way the app works is simple. You have two modes, although they're not thusly named within the app. The tryout mode, where you get to try the various instruments separately. And the recording mode which will record a pattern of your tunes and loop it.

While you're not recording, you can switch between any of the three main instruments and try out the different effects without worrying about messing up anything. Each instrument has different options to it.

The drum machine is composed of four different sounds: a kick, a snare, hats and a perc sound. Each of these sounds have a rythm wheel. This ranges from 0 (or OFF) to 16. Moving on the X/Y axis on each individual sound's box will produce a different output, depending on which preset is being played. Holding down on a box will produce a pre-sequenced rhytmical pattern that depends on both the value in your rythm wheel and on where you're holding the finger on the box itself.

The bass and lead synths are a bit different in that they don't have different boxes you can play around with. Rather, these two instruments will play notes within pre-selected scales, with an adjustable range. The rythm wheel is still there as well.

But wait, it's not all. Each of the three instruments also has various sound kits, so you can entirely change the feel of your beats by flicking left and right on the sound kit for each instrument. This lets you select between various drum sets, or bass sounds for example.

Once you've experimented with all the sounds and want to tackle your masterpiece, hit the record button. That will set the app in record mode and everything you do while in this mode will be recorded and played back in a loop. Start off with a drum kick by holding the finger on it. Then add a snare by tapping consecutively a few times. Add a classic bass to the mix and maybe an electric lead. You get the drift.

Whenever you want to go back to experiementing with sounds, just pause the recording session. Anything you do while not recording doesn't stick. Once you go back to recording mode, the app picks up the patterns where you left them. Figure works nicely on just a few gestures. Swipe to change sound kits. Spin to change range and steps on the bass and lead. Slide to change the rythm wheel.

You can of course save your beats, play them back later at any time or export them to iTunes.

So if you have a couple of minutes and want to bust out some nice grooves, check out Figure on the AppStore! Absolutely no musical training is required with Figure! Its design stands as a landmark of the beauty and simplicity behind a flat design. It's incredibly easy to use and you'll be forgetting yourself in no time. Guaranteed!

Have this iPhone App already ?
What do you think of Figure? Scroll down for our comment section and let us know!