Home » Who Wants To Be The Viking Master Of Icebreaking?

Who Wants To Be The Viking Master Of Icebreaking? 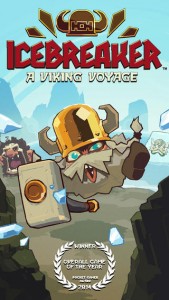 Looking for a new puzzle game to put your mind to the test? You feel like you haven’t practiced your strategy moves in a long time and want to get them up to date? Then, Icebreaker: A Viking Voyage (Universal) is definitely the game for you. Challenging, engaging, a real brain teaser that will bring you a lot of satisfaction with every level you clear. And it’s absolutely free of charge…this week only.

Look at the big picture, and remember: sometimes the answer is right in front of you

My experience with Icebreaker was... let's just say weird. I’m used to games that get harder and harder as you clear more levels. But with Icebreaker, I was only at the second level, when I realised I wasn’t able to clear the mission. And the first level was more of a Tutorial than an actual challenge, so you can understand my frustration. I was ready to give up on the game, when, in just a couple of moves, I managed to clear the mission I’ve previously wasted tons of moves on. And after that, it was smooth sailing: I was clearing level, after level, after level, getting more and more addicted to the game.

So, what’s the secret? Well, Icebreaker is like those riddles you bust your brains trying to figure out the answer, when it was all along in front of you. Although it looks really complicated, if you take a moment to look at the big picture, and apply some basic physics rules, you’ll soon see you don’t need to waste too many moves to clear the missions. It’s all extremely logical. And even if the missions get more and more complicated, if you take it step by step, while calculating your moves in advance, you’ll only spend minutes instead of hours on every level.

But enough with the insights. Let’s cut to the chase. Your main goal in Icebreaker is to free the vikings that are captive inside ice blocks. To do so, you must bring them to your boat, since you can move your boat towards them. And, of course, the blocks of ice where they are stuck won’t be right above the boat. It would have been way too easy and boring if all you had to do do was cut the ice and you were done. No, Icebreaker is all about puzzles. You must always look at the big picture to see what ice blocks to break, how, and when, to get frozen vikings inside your boat.

Also, the less cuts you make to complete your mission, the more coins you earn. Plus, you also get coins by bringing treasure chests to your boat. But, guess what? They’re also stuck in ice blocks. Now, of course getting them first usually makes it harder to save the vikings after. And once you get the vikings safely to the boat, you can’t attempt to get the treasure chest, since your mission is already over, and it’s time to move to the next level. So, you need to get your priorities straight, and decide whether you want to clear the mission faster, or develop a more advanced strategy to both get the treasure, and save the vikings. All with no more than 50 moves, because this is the max number of moves you get per mission.

Use obstacles to your advantage

But wait, you think this is all? Oh no, you also get human eating Trolls that are right in the way, waiting to devour the frozen vikings on their way to the boat. And they leave gross buggers all over the place that get the ice blocks stuck on them. Also, if the vikings fall into the frozen water, they drown and die. Falling over a cliff will also kill them. Hitting pointy weapons will kill them. Actually, hitting any obstacle will kill them. Simply put: if the ice they’re in breaks or melts anywhere else except on the boat, the vikings die, and you have to start the level over again.

It sounds complicated, I know. I was a little disarmed at first too, as I’ve said it before. But, once you get a hang of the game, it will be hard to stop playing. It took me more than an hour to stop playing and start writing this review. Because, all in all, Icebreaker is not complicated just for the sake of being complicated. Level after level, you can actually feel your brain working faster and better. You think more strategically. And, with 140 levels, 3 lands to go through, side quests and epic bosses to face, Icebreaker is guaranteed not only to be the App of the Week in the App Store. No, I think Icebreaker will also be the App of the Week at your office, at home, on the way to the office and the way back home; basically, wherever, and whenever you get the chance to play it.

Have this iPhone Game already ?
What do you think of Icebreaker: A Viking Voyage? Scroll down for our comment section and let us know!