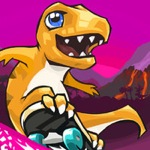 For all of you NFL fans out there, the App Store has a real treat in store for you. This is Madden NFL Mobile, and you absolutely must give it a try. Even I tried it, and thought it was really cool. And I’m far from being an NFL fan.

Ups: Madden NFL Mobile is a typical EA Sports game. And I say this in the best possible way. The game has got everything that make EA Sports’ games probably the best sports games in the App Store, on Playstation, X-Box, and whatever gaming device you can think of. Great graphics, realistic gameplay, intuitive controls. Plus, the game offers you the possibility to be both player, and manager. So, you get all the action, but also all the responsibility for the failure, or the success of your team.

With Madden NFL Mobile, you get to build your team, collect money, buy better players, train them, plus personally choose the tactics you think are the best. And all this is not just to clear missions and play against a computer. No, you can also compete with your Facebook friends. And participate in Live Events. It’s as real as it gets.

Downs: I thought long and hard, and I really don’t think there’s any flaw in Madden NFL Mobile, if you’re an NFL fan. However, if you’re not a fan, and you don’t even have the basic NFL knowledge, the game will get you pretty confused. The tactics you have to choose from at the beginning of every round will look to you like weird equations on a board. And even if the Tutorial will take you through all the schemes, step by step, it will be hard to follow, if you don’t know what all these moves mean, and how they are called in a real NFL game. Of course, all this has got nothing to do with the quality of the game. And, you can always pick the default recommended tactics and moves. But it just doesn’t feel the same, if you don't speak fluent NFL.

If you’re a South Park fan, and have seen the episode where all the adults go to learn how to play Minecraft only to get ridiculously addicted to the game, then you’re prepared for the feeling you’ll get playing Little Raiders: Robin’s Revenge. Because although it looks like a child’s game, it can easily captivate a grown-up, as well.

Ups: Little Raiders: Robin’s Revenge has got that special something that makes you play the game for hours. And I think that special something, in this case, resumes to easy quests that get you hooked. So hooked that you’ll find yourself saying: “ok, this is the last mission, it only takes a couple of minutes to finish it, and then I’m done.” But you won’t be done, because there will always be another mission. And it will always take you no more than a couple of minutes. So, before you know it, you’ll end up with tens of houses, multiple upgrades on the House Tree so you can build more and more houses, a real army of trained archers and fighters, plus a whole list of cleared achievements. And you’re still not done. You still want to build more, collect more, train more warriors and go on more missions.

Dino Skater is your basic arcade game. Your job is to help Dino skate his way through all sorts of dangerous surroundings, while avoiding obstacles, and collecting items. It’s your basic, fun arcade game.

Ups: Dino Skater is an endless skating game, where you have the control on the speed of Dino’s skateboard. The controls are extremely simple, and you probably already know them from other similar games: tap for speed, release to jump, and hold to slide along various surfaces. And since you’re controlling a little dino on a skateboard, don’t be surprised if among the surfaces you’ll have to slide along, there will also be other dinosaurs’ long necks, backs or tails. Plus, given the characters, Dino Skater couldn’t have been anything but a cute game. And Dino’s mission to save the dinosaurs from extinction, after a meteor hit the Jurassic World, only gets you more attached to the story, and to Dino, the little skater.

Downs: Although the controls are pretty basic and intuitive, I didn’t find the game to be so easy to control. In my opinion, tapping on the screen is a more intuitive control for jumping. Dino Skater also has pretty poor graphics. But I can understand this to some extent, taking into consideration that the precursors of this sort of games were old, pixeled, arcade games.

But what I found most confusing is that after you end your run, and have to restart the game, you can’t immediately do that. The number of coins you earned appears on the screen, with a question mark button under. Now, the only thing you can do to move forward and restart the game is tap on that question mark button until the number of coins is reduced to 0. And that really got me confused. What is the point of all that? Does this help you collect the coins you’ve earned the previous game? Or, quite the contrary, you lose this number of coins to move on? This really got me puzzled. And unintuitive content is a big downside to any game.