Home » Reel in the big one with iFishing

Reel in the big one with iFishing 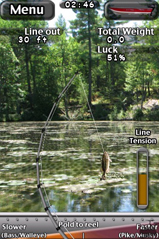 It's no secret game simulators have had a big impact on the iPhone's gaming development. Great titles such as iBowl or Waterslide Extreme, to name a few, have made it to the top of the App Store, and even if they don't have a huge fan base, they still rely on a pretty stable user base. iFishing is simply one of these games that doesn't amaze everyone, and couldn't appeal to any gamer, but that clearly reels in, so to speak, quite enough users to live up to standards.

iFishing is a mobile fishing simulator that provides a realistic and in-depth fishing experience for the iPhone. To put it bluntly, your iPhone is your fishing rod, and the game itself is your pond. Any fisherman will tell you that's all you need: a fishing rod, lure and water. Sure, luck does play its part in the real world, luckily on the iPhone you have quite a number of indicators to tell you where there's fish, where to cast, what kind of lure to use and even when to give the fish a breather.

As soon as you start the game, head off to a tournament where you'll be required to catch as many fish as you can so that at the final weigh in, you're on top. You get to select your fishing time, and the lake on which to fish. There are 15 unlockable lakes to enjoy, so there's plenty of game play time with enough variety to keep you in it.

Notably, when you first head off to the lake, you'll be required to drive a boat around scouting for areas where there might be fish. The radar underneath your boat will show you what's down below, but, as a general rule, stay clear of deep waters and generally head towards the shores. Once you select a location, just throw anchor and start fishing. Select the lure you want from a variety of lures with different actions (jigs, topwater, spinnerbait, divers) and cast away.

Casting controls are really developed with iFishing. You tap and hold the cast button and swing the iPhone in a back-to-forth movement as if you were casting with a real rod. Don't forget to let go of the button to release the line. Be careful with slippery hands so as to not throw your iPhone agains the wall, or worse, in your bathtub. :) The slider control at the bottom of your screen will let you reel in by controlling the speed. You can also pull the iPhone towards you or sideways, and the line will move accordingly. Just before starting to reel in, decide on you line depth, and let the lure sink to that.

As you might have guessed, location, lure, line depth and reeling speed will make the difference between catching a fish and reeling in thin air. Changing your line, lure and the dragging movements you make will also decide what kind of fish you're likely to lure in. You're basically looking at smallmouth bass, largemouth bass, walleye, pike, musky black crappie and perch, which is enough variety to keep you occupied.

The iPhone will also let you know when you get a bite by vibrating. Pull upwards to hook the fish and then start reeling in. Be careful at the line sensitivity indicator, and don't fight the fish on a red indicator or you'll lose it. This is actually what makes the game quite interesting - the extremely realistic fish fights. Keep that line tension in check and you're bound to reel it in. With bigger fish, you'll also have the opportunity to see them jump in the distance as you reel them in.

Once you get the fish in the boat, it will be weighed in and if it's too small, you can let it go. If it's a monster on the other hand, you can take a picture and save it in your trophy room, where you keep track of the biggest fish you caught in-game. Also, the game will let you superimpose your catch over an existing photo on your device and email ti to your friends. So go ahead, brag about it, we all do it!

Graphics and sounds are very impressive with iFishing. The game enjoys real life scenery and ambient sounds based on where you are in the lake. The game comes in a lite version, with one lake and one tournament to choose from, but provides you with a great taste of the full version that's available for purchase at $2.99 in the App Store.

Have this iPhone App already ?
What do you think of iFishing ? Scroll down for our comment section and let us know!