Home » Monster Dash Will Get You Running…Endlessly 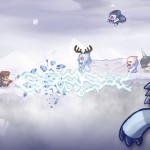 Monster Dash Will Get You Running…Endlessly 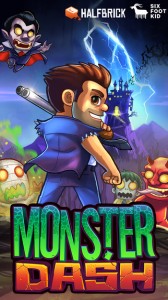 If you are a fan of endless runners, take pleasure in playing Super Mario-like sort of games, and have enjoyed playing Jetpack Joyride, then you might already be vigorously playing Monster Dash. But, in case you haven’t heard about it, or haven’t got to buy it by now, then you’re in luck: Monster Dash is currently the App of the Week in the App Store, so you can download it totally free of charge this week.

What is Monster Dash

Monster Dash is an endless runner that will probably remind you of Super Mario. It’s got retro graphics. Some of the monsters are pretty similar to the ones in Super Mario. And jumping on top of them will have the same effect it did when you made this move as Super Mario: they’ll tumble and fall. But, with Monster Dash, you also get guns, zombies, and a little more incentives to play the game for countless hours than just the glory of having saved the princess in the tower.

All you need is coins

Monster Dash is a quest-based endless-runner. Your job is to run as much as you can to destroy as many monsters as you can. The more monsters you kill, the more coins you earn. And that’s exactly what you’re looking for: collecting as many coins as you can. Because just running, while avoiding obstacles and monsters will only bring you the satisfaction of having run all that distance. But what brings you the money, so to say, are the monsters you kill.

And you really need those coins. Because they are the main game changers. You need a certain number of coins to get from one level to another. You need coins to buy better guns and destroy the monsters easier. You need coins for practically everything fun that the game has to offer. And, of course, you can also buy them. But where’s the fun and pride in that?

Now, the controls are extremely intuitive, and the gameplay extremely simple. You have one button for jump, another to fire your weapon, and that’s pretty much it. But what I found a bit annoying is that every time you start the run, you must tap once on each button to somehow activate the game. Unless you do this, your character will just endless run on the screen, without any purpose, monster or obstacle, leaving you wondering what the heck is going on. And this can be pretty confusing and frustrating at first, until you realise you have to tap on each button every time you start a new run. I don’t really see the purpose of all this, but that’s just the way it is.

The more you play, the better it gets

Other than that, after you start collecting more coins, get better guns, and reach a higher level, the game gets better, and better. You come across all sorts of cool items, and power-ups. You last more in the race. And you really start to get a sense of this game. That’s when the fun begins, and you start enjoying the game even more.

Long story short, Monster Dash is a pretty fun time waster. However, Jetpack Joyride got me hooked a lot faster. And a lot longer. I think the gameplay was a bit more engaging. And I also must admit I am not a fan of tis whole Retro design trend, either. But since it is App of the Week in the App Store, I think Monster Dash deserves a try.

Have this iPhone Game already ?
What do you think of Monster Dash? Scroll down for our comment section and let us know!