Home » Anybody Looking To Be A Ninja Turtle Today?

Anybody Looking To Be A Ninja Turtle Today? 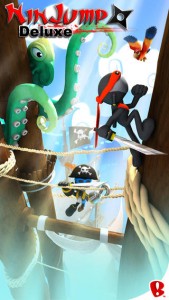 I think a lot of you guys dreamed to be one of the Ninja Turtles when you were kids. There was just something extremely captivating about those Ninja Turtles in the cartoons that made us all watch one episode after another at the edge of our chairs. Also, whatever Ninja collectable was on the market, we had to have it. And guess what? Now you can add another item to your Ninja Turtles collection. A fresh, fun game specially designed for your Apple device, called NinJump Deluxe HD.

NinJump Deluxe HD is an endless running game. But before saying you have had enough of endless running, think of the Ninja Turtles of your childhood. And give the game a try. It might surprise you.

The graphics of the game aren't extremely elaborate. But the game is quite creative, allowing you to control your endlessly running turtle through 4 different settings. Hit parrots and avoid cannons on the Pirate's ship. Collect all sorts of colored, funny looking creatures, but stay away from the evil snakes when you're in the Jungle. Don't be afraid to hit other runners, but be carful not to hit a guard on your way through the Castle. Or, hit birds and foxes, while avoiding the evil warriors waiting for you along the way in the Classic Mode of the game.

I think you got it by now, the goal of NinJump Deluxe HD is pretty simple: run as far as you can, while hitting certain things on the way, and avoiding others. Oh, and you should also collect shields every time you come across them, to make your task even easier. So, what's all the fuss with this game? What makes it so addictive?

Control everything with a single tap

It might sound annoying, but since your only action in this game is moving from one ground to another, this also makes it really easy to control. Because NinJump Deluxe HD is literally a one tap game. All you have to do is tap anywhere on the screen, and your turtle will jump to the parallel ground. How easy is that?

And even if with NinJump Deluxe HD, you don't collect coins to buy boosts, the game is not without its powerups. If you hit a certain item three times in a row, like a bird, a fox, or even a bomb, you get to travel on that creature or object for a couple of miles, with incredible speed and strength. Simply put, your turtle will be invincible for a couple of miles.

Enjoy the game for free, this week only

Long story short, it's true there's nothing mind blowing about the game play of NinJump Deluxe HD. The controls are more than simple. The graphics, pretty basic. But it's just something about it that makes you hit Play again, and again, and again. I couldn't really say that it's worth buying it. But since it's App of the Week 'till the end of the weekend, therefore totally free of charge, I say why not give it a try?

Have this iPhone Game already ?
What do you think of Ninjump Deluxe? Scroll down for our comment section and let us know!