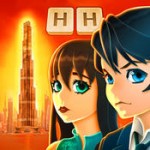 Word games are catchy and smart. Scrabble and Words with Friends are just a couple of examples. But what if a word game had an actual story to it? And you wouldn’t just make up words to score points, but also to take the story further away. That’s the idea behind Highrise Heroes - The Towering Word Game. And I find it pretty cool.

Ups: Highrise Heroes brings up something new. It’s a mystery game, where you form words, instead of looking for hidden items, and solving puzzles. And it’s a word game, with a touch of mystery, and a complex story to it. The result? A fresh, new game, like no other I’ve played before. Your job is to connect letters, in a vertical, horizontal, and even a diagonal line, to form words. But here your aim is not necessarily to form long words to get more points. In Highrise Heroes, your main target is to bring all the characters safely to the bottom of the tower. By clearing all the rows beneath the character icons, through word formation. And, as the game progresses, besides having a limited number of moves, you’ll also have to bring the characters down before they run out of oxygen, add certain items on the board in the formation of your words, clear the level in a certain period of time, and so on. So, you will constantly have a new incentive to keep on playing the game.

Downs: But all these changes in the game also raise the difficulty level. That’s not necessarily a bad thing, since a game does need to be at least a bit challenging to keep the player going. But you might end up dreaming about forming words after struggling to clear a couple of levels. It is, however, a good exercise for the brain. Plus, whenever you get stuck, every character has a special skill you can use to help you go on. It will cost you some extra moves to use that skill, but it might be just the boost you need to clear the level faster.

Download Highrise Heroes - The Towering Game from the App Store

A Marvel heroes game can only be action-packed. Just like the movies. Or maybe even better, if you come to think that you control the outcome of the game. So, I think it’s only natural for Marvel Contest of Champions to be one of the best games this week.

Ups: Marvel Contest of Champions is a PvP player, so your job is clear: fight, fight, and fight some more. Cool design, easy and intuitive controls, plus a number of quests to make the game more interesting, and the gaming experience more fun. You start the game with two Marvel champions, and as you collect crystals, and gold after every battle you win, you can upgrade your heroes, and sometimes, also come across new heroes to complete your team. You go on quests, take part in special events, and battle in 1vs1 or 3vs3 matches.The more you fight, the better you get, and the more items you collect. So, fight, fight, fight! In Marvel Contest of Champions, fighting is not only allowed, but also your only chance to win.

Downs: Marvel Contest of Champions doesn’t bring up anything new. Just like any other PvP game, you go on missions, upgrade your players, collect items, get involved in special events, and so on. In all fairness, these sort of games are already complex enough, so it’s pretty hard to find something new, and useful to bring up, without risking to overcrowd the game screen, or irrationally increase the difficulty level of the game. So, it’s not a flaw that makes the game, and the gaming experience poor. It just makes it like any other game in its category.

Download Marvel Contest of Champions from the App Store

For the explorer in you, who hasn’t got so much time to wander in the wilderness, Seabeard is exactly what you’re looking for. Start an adventure, without having to leave your room!

Ups: Seabird is more than a construction game. Actually, building is just a small part of what the world of Seabeard is all about. Seabeard is more about starting an adventure, and exploring the seas and the islands in your way. You pick your captain, then start the journey, going through numerous quests. Drive your boat from one point to another, discover mysterious islands, collect whatever you come across, clear missions, and build your own magical island. Build your crew, play with your friends, and remember: everything surrounding you can be explored.

Downs: At times, the game is not as intuitive as it should be. For example, at the beginning of the game, you have to pull a branch out of the ground, and I had absolutely no idea how to do that. I kept tapping and swiping, and going back and fort from the mission window to the game, without having any idea what to do next. Finally, I came across a piece of info suggesting what I should do. But I was almost ready to give up. Maybe a more explicit Tutorial would help. Just a couple of tips to get you started. And since it is an exploration-based game, I’d suggest not starting to play it during a lunch break. To clear every big quest, you go through other smaller quests. And although this makes the game more engaging, it also makes it more time-consuming.