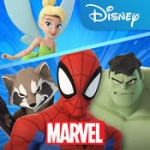 Disney’s main job has been, for decades, to turn childhood fantasy worlds into reality. And now, it looks like it’s taken yet another step forward in its mission to make childhood as magical as it can be. With Disney Infinity: Toy Box 2.0.

Ups: Disney Infinity: Toy Box 2.0 is a classic Disney masterpiece. I am not a child anymore, and still I got lost for a couple of hours in the Disney fantasy world. Picture all your favorite Disney characters being brought to life in a world you can create just the way you want it, as you can imagine it. With Disney Infinity: Toy Box 2.0 not only can you create your fantasy world, but you also send your toys on exploration quests to collect all sorts of items, and gain experience. Or on fighting missions to save kidnapped princesses. Driving races. And the list goes on. If you can dream it, you can do it.

And you constantly find out new stuff you can do. There are all sorts of characters whose job is to guide the toy you’re controlling, help it find out how it can do all sorts of stuff, or send it on missions. It’s an ongoing Tutorial, both written, and audio, that is intended to get you through the guidelines step by step, instead of filling your head with all the information at once. Plus, you also get experience points, and unlock toys by just listening or reading the guidelines each character offers. Now, how famtastic is that?

Downs: If there’s something I really didn’t like in this game, these are the controls. I think the games that are designed for a touch screen should have tap, or swipe-based controls, instead of buttons. Why hold and move the camera button, or a movement button, to look around, or go from one point to another? I find it way more easy, and user-friendly to tap in the direction I want my character to follow. Swipe to look around. Double tap to jump. And so on. I have nothing against tapping on buttons to apply a certain special attack, or open a menu. But having buttons for camera, and character movement is, in my opinion, bad user experience.

And another bad user experience I had with this game is that, after a certain period of time, it crashed. I don’t know if it had anything to do with my device. Or it’s a bug. Or it’s intentional to make you continue the game with another character. Because, although it crashed, the game progress wasn’t lost, but the previous character I had played with was locked, and I always had to pick a new one. Whatever it was, it took a bit of magic away.

How does a fun, strategic, jelly vs jelly shooter sound to you? Intrigued? Then, you have got to check out Jelly Wars this week.

Ups: Jelly Wars is a part shooter, part building and collecting game. You buy all sorts of buildings to produce supplies, then convert the supplies into other, more complex items, to, finally, use these items to create bombs, and other weapons. Because your main goal in the building part of the game is to produce a continuous supply of destructive weapons. These weapons are your main tool in the fight against other jellies, along with a strategy you must constantly adapt to the situation you’re in. Because Jelly Wars is a real-time multiplayer game, where you’ll have to destroy up to 7 enemies to be number one. And, as you can imagine, while you’re attacking them, they’re not just sitting, and waiting for you to make your move. Especially since they are controlled by other players just like you, each one being after the same goal you’re at.

Downs: First of all, I found the weapon-making process to be exhausting: build that, manufacture that there, collect it, than build something else to use what you collected to make something else, then use that in another building to finally make your weapon. My head spins just explaining. Second of all, the gameplay is really confusing at first. You have to pinch the screen to realize where the opponents are, although no info box suggests that. Then, try to discover the easiest target as fast as you can, and make your move.

There’s no way to protect yourself, so if more players decide to attack you at the same time, you’re pretty much dead. And once you make your move, you see numerous reruns of the move you’ve made, so, at first, I was like: should I shoot again? Does it repeat my first move over and over again, so, basically, I have just one move, and if I don’t get it right the first time, it’s pretty much game over? It’s true: once you figure it out, the game can be extremely fun. But until you get to the fun part, there’s a load of confusion, and annoyance you must overcome.

If hunting down vicious, alien-like creatures sounds like just your type of game, then you’re in luck. Evolve: Hunters Quest has all the slimy beasts you can imagine you’d enjoy shooting down.

Ups: Right from the start, the game is very good at setting this creepy, mysterious, horror-like sort of state. And as the story of the game is being unraveled, it gets you more and more in the right state of mind you need to fight these creatures. You can feel you’re on the verge of starting an adrenalin-packed game. And, as you complete quests, buy boosts, unlock crates, and use bones to recreate mythical creatures, you feel quite hooked. You really want to see what’s next. Especially since at least the first 10 or so missions are quite easy to complete. So, it’s just enough to get you carried away, all pumped up with energy, and determined to clear even more missions than you already have.

Downs: All that atmosphere the game creates at the beginning, kind of fades away when you realize Evolve: Hunters Quest is a mix and match game. You don’t actually shoot these creatures. You mix, and match all sorts of items, differently colored and shaped, each one corresponding to one of the players in your team. Match 3 or more health icons to restore the team's health level, and the medic in your troop attacks the beast. The more same colored and shaped items you match, the more powerful the attack, your team members get better, and you unlock all sorts of destructive, special attacks. And it all sounds rather cool than being a flaw of the game. And it is pretty cool. And the idea is quite smart. But I could not keep myself from feeling a bit disappointed at first. Because it all indicates you’re about to play one engaging, raging, action-filled shooter. And you end up playing a mix and matching game. With a twist, that’s right. But, in the end, it’s still just a mix and matching game.