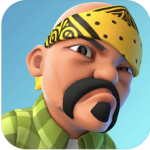 Valentine’s Day may be over. But the time is always right for loving, and playing a smart, strategic game. And Staying Together is the perfect combination between the two.

Ups: Staying Together is an extremely strategic puzzle game, wrapped up in a beautiful love story. And that’s what I loved most about it: it is pure strategy. Your job is to control two characters at the same time, the ultimate goal being to bring them together, at a certain check point, both safe and sound. And although it might look really easy at first, as they both have pretty much the same obstacles to face on their way to one another, things get a lot more complicated when their paths change. Mostly because you must always bare in mind that, since they are coming from opposite directions to meet each other, what is left for one, is right for the second, and the other way around.

Staying Together is a game that will put your mind at work. It’s got really nice graphics. And it’s level-based, so there’s always a new challenge, bigger, and harder coming your way. Plus, every stage of the game is themed after one of the fours seasons of the year, which I though made the whole game even more romantic, and sweet.

Downs: I think the only aspect I didn’t really like about Staying Together were the controls. You must tap on some arrows at the bottom of the screen to make the characters move, or jump. I would have found it a lot more intuitive, and user-friendly, if the player could tap in the direction it wants the characters to follow, and double tap to jump. The game is difficult enough as it is, and it only gets more and more difficult, so I really think the last thing it needed were controls that make the player's job even harder.

If you enjoyed playing the already legendary Cut the Rope games, or Pudding Monster, then you can’t miss out on the newest game release from ZeptoLab: King of Thieves.

Ups: King of Thieves is an engaging PvP game. It’s the less time consuming building and collecting game. It’s an endless runner. And a strategic puzzle game. The result? A super cool game, where your job is to raid other players’ dungeons, and steal their treasures, while being careful to keep your treasure as safely hidden in your dungeon, as you can. Because, what goes around, comes around. And, King of Thieves is both an offence, and a defence game.

King of Thieves is also a pretty smart game. What I found to be quite clever is that, although you must make it as hard as possible for other players to reach the treasure in your dungeon, you can not make it impossible. Every time you add, or change the place your traps initially had, you, yourself, must be able to reach the treasure twice for your trap scheme to be saved. So no tricks allowed. Only smarted, skilled, fair play. The graphics are really nice. The controls, quite intuitive. There are always missions to complete, gems to collect and recycle to get a higher rank in the game. Plus, all sorts of boosts to help with your strategy. So, King of Thieves is anything but a boring, static game.

Downs: I found the game Tutorial to be quite confusing, at times. For example, when I reached the point where I had to upgrade the lock of the dungeon, I just couldn’t figure out what I should be doing. I tapped on all buttons, swiped all over the screen, but nothing worked. So, I think the Tutorial part is a big minus for the game. It should be more explicit. And better organised. Because when you have an info box at the top, and all sorts of blinking icons at the bottom, all coming at you at once, you don't really know what to do first. Or, quite the contrary, you don’t get enough info, and you end up doing everything that crosses your mind, hoping that, eventually, something will work.

If you ever found yourself fascinated with gangs, cartels, and other similar stuff that look so cool on screen, but are, oh so dangerous in real life, then you have got to give Gang Nations a try. Same rush you get watching gangs fight in movies. Totally harmless in real life.

Ups: Gang Nations feels like the real deal, without being as dangerous as if you were the head of a gang in real life. Because that’s exactly what you are in Gang Nations: the head. So, you must be in charge of everything. From building the most powerful, impenetrable cartel, to deploying your best troops, where, and when the time is right to create most possible damage. And, although it’a all fun, and games, you can create your gang along with your real-life friends, and other online players. Plus, you battle against online players to increase your reputation, not just AIs. So, Gang Nations is pretty exciting, indeed.

Downs: If you’re fascinated about this whole gang world, and have some, or, better said, a lot of time to waste, then Gang Nations is pure perfection. But if you don’t, then it’s just another extremely exhausting, and time consuming game, floating in the large bowl of other dozens similar games. It is true, each one of these games has its thing, its special touch, its certain something. But, in my opinion, with the risk of sounding like a broken record, once you’ve played a couple, it feels like you’ve played them all.