Home » Duet Game Is A Challenge You’re Going To Remember 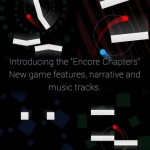 Duet Game Is A Challenge You’re Going To Remember 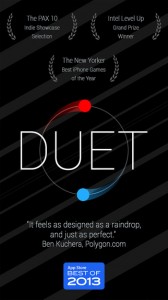 If I only had one word to describe Duet Game, this would probably be musical. Although music doesn’t really have anything to do with the gameplay, the soothing musical background is the first thing that draws the player’s attention, even before starting to play the game. It’s relaxing. And it feels like something out of this world, taking you to a place where the grass is always green, and the birds are chirping in the clear, blue sky. You feel totally calm and serene. Or, at least, you should. If you don’t feel it yet, then maybe you should explore the game options a bit more, while listening to the sooting music. Because once you start the game…

One of the most difficult games I've played so far

…you won’t feel so calm, and relaxed anymore. Duet Game is one of the hardest games I’ve ever played. It’s not stupid, impossible to play hard. But it is a real challenge. The controls are extremely simple and intuitive: all you have to do is tap on the left, or right side of the screen to move the two vessels that are in sync. The gameplay is also simple: all you need to do is avoid hitting the vessels against the obstacles coming at you. Plus, even the graphics are also extremely simple, and clear. And still, Duet Game is an extremely difficult game.

Mainly because if you want to have the slightest chance to master Duet Game, you need really good hand-eye coordination. With Duet Game, you’re not focusing only on one player, or one item you must safely take from point A, to point B. You must, at all times, focus on both vessels, and avoid from hitting either one of them against an obstacle. Because, once one gets hit, it’s game over, and you start the level all over again. So, if your hand-eye coordination is not your top strength, then you’ll find yourself stuck on the first level of the game for a longer time than you would have initially thought, or wished.

I must admit I am extremely bad at hand-eye coordination. So, I can’t say I initially had too much fun playing Duet Game. But the harder you struggle, the greater the satisfaction when you finally make it. And although it’s such a challenge, it’s captivating. The game has all sorts of cool stages, like a Story, and an Epilogue Mode, many challenges to clear, and also an Encore Mode up for grabs for $0.99. Plus, every Mode comes with a lot of chapters to enjoy, each one with its collection of levels to clear. And the chapters have really, really catchy names. The 5 stages of grief are just a few of the titles, plus other similar, one-word with a powerful impact titles like: hope, ignorance, or guilt.

So, yes, Duet Game is something else. I found it to be quite creative, and intriguing. And if it would have some sort of difficulty level you could choose, I think it would also be more accessible. Plus a pointer or an info box to let the player know how many more obstacles he has to face until the level is cleared. I think this would help the player push his limits, and focus a bit better when he knows he’s just a couple of obstacles away from finally winning.

App of the Week

All in all, I probably wouldn’t have downloaded Duet Game if it wasn’t App of the Week. I can appreciate all its qualities, but it really isn’t my type of challenge. The best part is that this week, you can find out if it is your type of challenge. Totally free of charge.

Have this iPhone Game already ?
What do you think of Duet Game? Scroll down for our comment section and let us know!