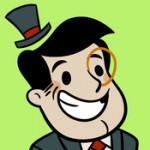 You need to spend money to make money. That is the basic principle behind AdVenture capitalist! And if it sounds like something you might agree with, then this is a must-have game for you this week.

Ups: AdVenture capitalist! is something else than what you regularly find each week scrolling through the list of new games in the App Store. The goal of the game is pretty basic: your job is to sell and buy stuff, until you basically drop. You start out with selling lemons, and try to make your way to owning top selling oil companies. With AdVenture capitalist! you can literally be a millionaire over night, as long as you tap, tap, tap. Tap to spend money to improve your business, or start a new one. Tap to collect money. Tap to hire managers, make upgrades, and buy all sorts of cool boosts. All these actions, along with attracting investors, will only bring you more, and more money. And that’s pretty much the goal, right? The controls are as basic, and intuitive as it gets. The graphics are really nice. And the background tune…absolutely hilarious.

Downs: AdVenture capitalist! doesn’t make you a real millionaire over night. But, of course, that’s not a flaw of the game, because, after all, you don’t spend real money, so it’s only natural you can’t win real money. But jokes left aside, the only flaw AdVenture capitalist! might have is that I don’t think it can keep the player hooked for more than a week. It’s not a game you’ll be recalling months from now. It gets real monotonous, real fast. So, at the end of the day, it’s just a fun, short-lasting, time waster.

Apparently, zombies are still in. And, truth be told, I think they will never get outdated. At least, not as long as there are Resident Evil sequels being released every couple of years. So, if you’re also a fan, World Zombination might be the game for you this week.

Ups: What I really liked about World Zombination is that here, unlike other zombie games, you can choose your side. So, you can either be on the Survivors Team, or join the Zombie Team, and (literally) go crazy. Once you’ve picked your team, your job is quite simple: gather your troops, and destroy the enemy. You have all sorts of different soldiers in your troops, each one with his special ability, and technique. So, a bit of strategical thinking is also required, in order to build the best line-up against the enemy. Besides that, as you’d expect, you’re in charge with almost everything. From completing missions to training troops, collecting rewards, and resources. Nice graphics, and a really helpful Tutorial.

Downs: World Zombination might get a big hectic when you’re in the middle of the fight, with enemies coming at your troops from, practically, everywhere. You know, in theory, where you should place your soldiers, according to their skills. And, before the first wave of enemies strikes, you can actually build a strategy. But after that, you’ll probably find yourself deploying any soldier you have wherever you can, hoping it will all be over soon. That doesn’t, however, affect the level of fun, and adrenalin each battle brings. It just makes things a bit more hectic than someone with a clear strategy, and organized thinking might like.

No matter how much I hate always playing the same type of game over, and over, there are some types of games that I just can not resist. And Jolly Jam got me hooked after playing only a couple of levels, I must admit.

Ups: Jolly Jam is that type of game that is so cute, and nice, and easy to play the first levels that it gets you hooked. And once that happens, even if you end up playing the same level over and over again, you just can not give up. Plus, there are always new challenges, new boosts you can use, new jellies that have all sorts of cool properties, and make everything around just pop, pop, pop. It kind of sounds like Candy Crush, right? And, truth be told, it kind of is.

But I really liked how Jolly Jam reinvented the mix, and matching part. Because here, you’re not looking to make a row of similar items. With Jolly Jam, you look for same colored, and shaped jellies located at opposite ends. Connect two of these jellies, and all the identical jellies inside the box, along with the two you connected, will get cleared. Sounds kind of complicated when you put it in words. But once you see it, you’ll get the hang of it in no time.

Downs: All I can hold against this game is the obvious: Jolly Jam is just another Candy Crush in disguise. And it’s not wearing such a good disguise, either. But, when it has an almost 5 start rating, with over 900 reviews, and it even got me hooked after playing a couple of levels, what more can I say? It looks like the world has not yet had enough, or, better said, played enough, Candy Crush-like games.