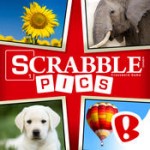 If you really like Scrabble, then you need to give Scrabble Pics a try. It’s new, fresh, challenging, and so engaging. I never thought Scrabble could get any more interesting, but this game is living proof that it could, and it did.

Ups: What I like most about Scrabble Pics is that it brings something new to the table. I rarely come across games that are totally fresh, and resemble nothing I’ve ever played before. And Scrabble Pics is one of them. The idea of the game is that it uses pics as crossword clues. But don’t think that a picture of a monkey necessarily means that the word you are looking for is monkey. It can be ape, or it can refer to the banana it’s holding, or the color of the banana, the tree behind it, and so on. So, you can really feel how your mind wheels are set in motion, trying to figure out the right answer.

Which can be tricky at first, but only gets easier as you figure out a couple of pics, because it is a crossword puzzle, after all. So, everything is interconnected. Plus, you can always use the game clues to find the answer faster. Or even ask your Facebook friends when you’re stuck on a pic you just can’t figure out. The controls are extremely intuitive. You just start the game, and there’s no need for a tutorial to know what you need to do. And it’s a level-based puzzle game, so you can feel it getting more and more challenging, but also more exciting with every level you play.

Downs: I can’t say I found any serious flaws with the game, while playing it. It’s true, it gets more, and more difficult really fast. So, maybe being able to choose the difficulty level would be a nice option. Or, if the pics were arranged by category, then you could pick a category you know real well, when you’re looking to relax, while playing. Or a more difficult category, when you’re looking for a challenge. Also, it would be nice if you could play against your friends, in real time. But, in the meantime, it’s really cool you can involve your friends in the game, and figure out the answer you are looking for faster, by asking them on Facebook.

Do you feel up for the task of raising dragons, taking them to battles, and providing them with all they need to be happy and strong? Then Dragon Mania Legends might just be the game for you this week.

Ups: I can’t yet figure out whether Dragon Mania Legends is intended to be played by children or grown-ups. But the cool part is it can pass as a children’s game that even a grown-up could enjoy, and it can also pass as a grown-up game that is suitable for children, as well. Either way, long story short, Dragon Mania Legends is a game anybody can play and enjoy. It is a nice mix between a pet-raising game, and a battle-based one, without being too static, or too violent. And if that’s not enough of an incentive to play, Dragon Mania Legends is also quest-based, so there’s pretty much always something new for you to do: buy, and place buildings that bring you resources to feed, and raise the dragons, pet and take care of them, breed them, and take them to battle. Easy quests that turn Dragon Mania Legends into a really catchy game. All you need is time.

Downs: The biggest flaw of this sort of game is, clearly, the amount of time you end up spending to play it. And if you’re currently playing a similar game, you already invested a lot of time in, chances are you won’t be in too much of a hurry to start another time-consuming game. And since such a game is released at least every week in the App Store, you’re probably playing one already. So, I don’t think that, in this case, the big flaw of Dragon Mania Legends is necessarily that it is time-consuming. But rather that it follows a pattern too many games already follow. It is new, but not really fresh and original.

If you like Candy Crush sort of games, but are annoyed by all the randomness, and having to restart playing a level over and over again, then Bloks Game might be a good match. Pretty much the same rules as Candy Crush, but not even half as annoying.

Ups: Bloks Game is a simple, yet effective game. Bloks Game is the result of a really cool combination between a puzzle and a mix and match game. You have 16 colored squares on the screen, and you need to form lines of four similar colored squares. So, it kind of feels more like solving a Rubik’s cube, than playing a Candy Crush sort of game. First of all, because you can move the squares in any direction you like, as many times as you wish. There’s no move limit. Only a time one. But as you form the rows faster, you earn more time. Plus, you also have a couple of power-ups to help you.

Downs: Although Bloks Game has two modes, an Arcade, and a Time one, I didn’t quite see the difference between them. They both have a time limit. The only difference might be that Time Mode seems to somehow go on levels. But I didn’t quite figure out how this works, because at one point I was at level one, but on the Statistics Page it showed that I am still at Level 0. So, even if this is not as annoying as having to play a certain level over and over again until you clear it, it is pretty confusing, nonetheless.