Home » Who Misses Playing A Good Game Of Pinball

Who Misses Playing A Good Game Of Pinball 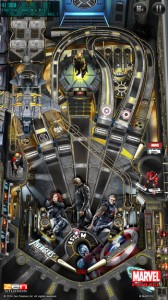 The App Store is home to all the games and apps you can imagine. For every problem you’ve got, there’s probably an app to help you find a solution. And a game to distract your attention from your daily routine. All the arcade, and board-games you used to love as a child have found their home in the App Store. And all the classics are being reinvented each day, becoming more fun, user-friendly, creative, and, basically, just really, really cool. Marvel Pinball is one of these games, and since it’s App of the Week in the App Store, you can now download it totally free of charge.

Marvel Pinball reinvents the classic pinball game, while keeping the basic rules, principles, and controls of the original game. The design is clearly better, and more complex than it was in the original, arcade game. It’s more interactive, so it doesn’t feel like you’re hitting a pinball just for the sake of collecting as many points you can get. That is the goal with Marvel Pinball, as well. But having this whole superheroes vs villains theme, every point you score makes you also feel like you’re an important part in the fight against evil.

Relive the feeling of playing a classic Pinball game

The biggest plus of Marvel Pinball is that it feels like the real thing. Of course, it doesn’t come with an actual set of buttons you can attach to your device. But, other than that, the controls are pretty similar to those in the original game. This makes the game a bit counter-intuitive, and not so user friendly, because, instead of choosing the pinball you want with a simple tap on it, you have to tap on the screen until the ball is selected. Or, when you type your name at the end, you move a cursor from one letter to another, instead of just tapping on the letter you want. And so on. But I found that to be nice, trying to keep the feeling of the classic game alive, rather than annoying.

Still a bit of improvement needed

What I found, however, extremely annoying was that the controls were, most of the time, unresponsive. Maybe this also isn’t a flaw, but rather another touch to make the game more similar to the original. I don’t know. Whatever it is, it’s bad user experience. There were more times when moving the levers to hit the ball didn’t work, than when it did. And that’s definitely not the way to make a game more challenging. Just annoying.

Now, another thing I think this game lacks is a good tutorial. It’s got a set of rules you can access at any time, but I think a Tutorial at the beginning of the game would probably be better. First of all, because when you turn on the game for the first time, there are all sorts of buttons on the screen that you don’t really know how they work. Second of all, even when the game indicates what you should do, some of the info is pretty confusing. Like press launch to begin, when you haven’t got any launch button on the screen. Also, it would be nice to know how many points you should score to unlock a new table, and not only how much money you should pay.

Marvel Pinball has a Single Player Mode, and a Multiplayer, where up to 4 people can compete against each other. And you don’t even need to have the game installed on 4 devices. Just like in the original game, every player takes his turn on the same device. Which I think is pretty cool. I would have liked it more if every player could submit his name after his turn ended, rather than at the end of the game. I think this would only make it clearer when a player’s turn is up. But, other than that, I really like having the option to play against friends, without having to install the game on multiple devices, or use an Internet connection.

Totally free of charge this week

All in all, I don’t know if I would necessarily pay to play Marvel Pinball. It has some pretty cool options, indeed, but the flaws of the game are pretty annoying. But since it’s App of the Week, and totally free of charge, I think it’s well worth your time. Especially since every Single Player game doesn’t take up more than a couple of minutes of your time.

Have this iPhone Game already ?
What do you think of Marvel Pinball? Scroll down for our comment section and let us know!