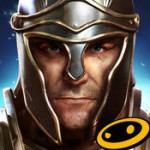 Thirsty for an engaging battle-based challenge this week? Then, search no more, because Blood & Glory: Immortals is exactly what you’re looking for.

Ups: Blood & Glory: Immortals is an extremely catchy battle-based game. Your job is to control your hero in his battle to save the world from vengeful Gods. So, you’ll have some pretty nasty creatures to face, and destroy. But, you also have all sorts of special attacks you can use, depending on the hero you choose to master: warlock, gladiator, or barbarian. Plus, as you win battles, you collect all sorts of cool stuff you can trade, or combine to get more powerful items to equip your character. Also, you can unlock new skills, as you go along the game. Or, you can learn them, by paying in gems. The graphics are very cool, and the gameplay, quite intuitive. I really liked the GO button that keeps popping on the screen during missions, so you don’t waste time wondering which way to go next.

Downs: At first, I wasn’t particularly in love with the controls, because they are pad-based. So instead of tapping in the direction you want your character to follow, you control him with a sort of touch-pad on the screen. But, as I went along with the game, I started enjoying the controls. And the touch-pad just seemed natural, at some point. What I really didn’t like was the Options Page. It was really flooded with all these things you can do, and check out after a battle. Don’t get me wrong, I appreciate having options, upgrading my character’s skills, combining items, visiting the store, receiving quests, and so on. But it’s kind of hard not to feel a bit claustrophobic when you suddenly get from the neat, clean battle screen to this overcrowded options screen.

Have you ever played the already legendary Where is Waldo game? I, for one, never did. But if it was half as fun as Waldo & Friends, I can understand its huge popularity.

Ups: Waldo & Friends really tests your attention to detail. Your job is simple: you have an overcrowded photo, with all sorts of drawings to distract your attention, but you have to stay focused. Because you don’t only need to find Waldo, but also all sorts of other well-hidden characters. The goal? With every mission you complete, you receive items you can trade for coins, and use the coins to unlock new scenes. Every scene comes with its own challenges to complete, and hidden characters for you to find. So, it’s practically a fun, and colorful endless challenge. Plus, you have all sorts of missions, and special levels that bring you cool, unique items like gems, energy packs, or bonus chests you can unlock.

Downs: Although it’s fun, and colorful, and there’s always another mission you need to complete, Waldo & Friends might get tedious at some point. After all, it’s like a mystery game, where you have to find all sorts of hidden clues. Except this mystery game doesn’t lead anywhere. Of course, there is a story behind all these images where Waldo, and his friends, are hiding. But it’s not as captivating as discovering secrets, or solving cases in a mystery game.

Puzzle games are one of the most provocative, mind-boggling games. And Dig a Way makes no exception.

Ups: Dig a Way is a strategic, extremely captivating puzzle game. Your job is to guide your character through a dark cave, one (or two) steps at a time, while digging his way to the exit point. But you don’t just dig for the sake of digging. Your focus is not only to get your character out of the cave, but also with as much gold in his pockets. And, preferably, with all three chests per level unlocked. The graphics are really nice, and the controls, intuitive. Plus, the Tutorial is really, really funny. Instead of just having a boring info page, or just another ordinary Tutorial, here, you learn all there is to know from a dog. It’s not an actual talking dog, of course. Just an animated, cute fella that will guide your character, using speech bubbles, through his adventure in the cave.

Downs: Since it is a puzzle game, and puzzle games tend to get more and more complicated with every level you clear, so will Dig a Way also put your patience, as well as your mind to the test. Sometimes it might get really frustrating, because it seems quite impossible to complete a level with all the gold in your pocked, and all the chests unlocked. But, there’s always a way. The problem is it might not be the easiest to spot, and it almost never is the fastest to the exit point.