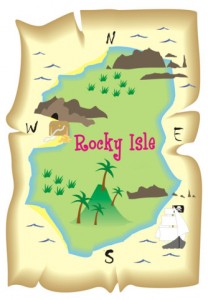 It’s been a while since I played a good number-puzzle game. I used to love their simplicity and, most of the times, the twists that these games brought to old classics like Sudoku or Minesweeper. Rocky Isle may be a bit disappointing in the graphics department, but it’s a seriously great game for the iPhone and iPad.

How to play Rocky Isle?

If you’ve played any type of grid-based numeric puzzle game, you should be able to get the low-down of Rocky Isle in no time. Start out with the easy puzzles and the game has a very low learning curve. The hard puzzles however will have you pinned down in front of your iPhone for a few good minutes!

Rocky Isle is Sudoku meets Minesweeper. You have a grid, separated by lines into islands of different sizes. Every empty square on each island corresponds to one number, and you have to put numbers (from 1 to 7) into these squares to form a straight ranging from 1 to the number of squares a given island is comprised of.

Now this all sounds Sudoku to me. But there’s a catch. You can place a number more than once on a row or column (not in an individual island though), but the number of squares that separates those two numbers must be equal or greater than the number itself.

You have to play it just once to get it and it’s all fun from there. Luckily, Rocky Isle also has a free version available so you can try it before you but it.

A choice in graphics

Rocky Isle is called as such for a reason. The default version of the game will have you placing hills with a different number of peaks that match the numbers 1 through 7. This will have you looking weird at the game, trying to make out how many peaks a hill has. It’s a bit ridiculous really. Luckily, you can choose to play the basic numeric grid, and that makes the game worth it.

The game graphics though are boring. It seems to me that the developers had a choice between simple black-white graphics and a seriously awesome tropical island theme, with high-level details for the hills. They instead went with a 1995-MS-Paint-made style that might put off users. I personally would have gone with the black and white theme all the way. The game is all about the gameplay here, it’s all about the puzzle and the numbers. That’s why Sudoku is popular. It’s a simple as it can get (it gets printed in newspapers, right?).

Anyway, I would not let graphics get in the way of a good game, and for that reason I chose to always solve puzzles with the numeric grid and pay no attention to the boring colors the game has now. It’s a great game lacking in graphics, and graphics can always be added later on.

Have this iPhone App already ?
What do you think of Rocky Isle ? Scroll down for our comment section and let us know!