Home » Shoot the Apple for iPad 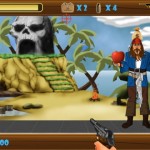 Shoot the Apple for iPad

The game is very simple to understand - a plus with many Twitter-brains now-a-days. The instructions are simple - move the iPad in the direction you wish for the target cross-hairs to move and then tap the screen to shoot. The first level sees you shooting apples and loot (money bags, sand timers etc) from the hands and heads of pirates. If you accidentally shoot the pirate instead of the targeted item, they get a little holey (but seem to survive your poor shooting). You do level up your gun as you move through the levels which is good, although it doesn’t improve your shooting obviously!

In an age where we are spoilt by graphics, smooth running applications and interesting game play at the touch of our fingertips, it makes it a hard environment to launch a successful app. Unfortunately, this app simply isn’t up to the standard, although that’s not to say that the idea doesn’t have some merit.

It seems the most frequent way to "die" in this game is to run out of ammo, but I suspect for those who have trouble aiming straight, time is also a likely factor as running out also ends in an untimely demise (apologies for the pun).
So by now you might be asking what is wrong with the app? Well, from the first screen that greets you as you launch the app, you have a feeling that someone went for the "basic" option - ok, it’s clear and simple to read, but it reminded me of what I used to see on old PC games that cost $2.99.

Entering into the game itself, the graphics again remind you of something from the 1980’s and the characters and cross-hair movement is jittery at best. I am sure half the time I didn’t hit the target but the app felt it needed to apologise by giving me the shot anyway. Frustratingly through the first level I hoped for better on the second and unfortunately I was disappointed as pirates were simply replaced with politian’s. The next level, exactly the same game play but with vampires and creatures of the dark.

A simple idea, with easy to understand instructions, but unfortunately you’re left feeling that some 12 year old developed this in the 1980’s and have just modified it for the iPad.

Have this iPad App already ?
What do you think of Shoot the Apple ? Scroll down for our comment section and let us know!