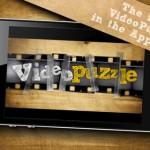 Puzzle Has A New Name – VideoPuzzle!

If traditional puzzles bore you, perhaps you should give VideoPuzzle a try. VideoPuzzle from Ideateca is, at its heart, a tile-based puzzle game, with the added possibility to use your own videos as game tiles.

The game play is simple. Once you've launched a new game, the tiles are randomly arranged on the screen and you have to put them back together by dragging tiles or double-tapping them. Dragging one tile over another make the two switch positions, while double-tapping any one tile will flip that tile up-side down.

Nothing new under the sun so far. The real innovation behind VideoPuzzle is that instead of still pictures, the game features videos as game levels. You can choose between Arcade mode, Camera Mode, Photo Album and Video Album.

The most interesting to me seemed the Camera Mode, where you can open up your iPhone camera and solve a puzzle with real-time video. There's no actual recording involved, but rather it's sort of an augmented reality puzzle, where you need to solve the puzzle using tiles of the reality in front of you. The really awesome thing is that with your front-facing camera, you can do a puzzle of your own face!

With Photo Album and Video Album, you choose either a photo or a video from you iPhone Camera Albums and use that as the puzzle. The game mechanics are the same in all these modes.

In Arcade mode, presumably you get to go through a bunch of levels with pre-installed video puzzles. On my iPhone 3G, the mode didn't work, as no video actually loaded in the view. All I got were blank squares, but it did seem like the mode was actually loading. I could ask for hints, pause the game and even switch tiles. I just didn't see what I was doing. (JK: A new game mode perhaps? VideoPuzzle for the blind.) Seriously though, I've written to the developers about it and hopefully I'll hear back from them.

There's not much in terms of settings or a social layer integration (it would definitely be a great addition to an otherwise innovative game). The moving images add an extra layer of difficulty to your puzzle experience. And the fact that you can use your own videos to solve puzzles makes me forgive and forget the setbacks mentioned so far and give it a 4/5 score for its innovation.

Have this iPhone App already ?
What do you think of VideoPuzzle ? Scroll down for our comment section and let us know!