Home » How Do You SingIt? 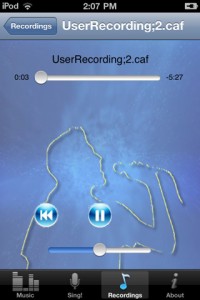 It’s now time for you singers out there to feast your eyes on another attempt to create the ultimate Karaoke app. After last week’s Karaoke Now, it’s time for SingIt to have a shot at the big title.

How does it work?

SingIt is relatively different from Karaoke Now, because it doesn’t require you to have or buy any special karaoke music. The app works great with any song from your entire iPod music library. With that, however, comes a price. Your own voice is recorded on top of the original song, so you’re basically doing a classic sing-along.

To make it work, simply start up the app, but make sure there are songs in your music library on your device. Choose a song to sing along to, then press record. You’ll get a classic countdown from 3, and then the red “On Air” button lights up. The music starts and you have to know the lyrics and when to start singing.

With these things in mind, SingIt is not really a karaoke app. You can choose any song on your iPhone, as long as you know the lyrics, and sing along. It’s that simple, yes.

Is it worth the buck?

In essence, you would get the same effect if you used the iPhone’s built-in Voice Recorder app and play music at the same time. SingIt will also let you save recording for later playback. It includes a headphone monitor, so you can hear your voice while singing with headphones.

There are no other settings you can activate, no editing capabilities for the music. Personally I would gladly pay more than the buck it’s priced at now, if I had some neat music editing features.

Right now, the app seems like it’s a Voice Recorder with integrated music playback, so you don’t have to open two apps or use another device to play your music while you record your sing-along.

Therefore, the title for best karaoke app/sing-along is still up for grabs. Do you guys know of any one app that can truly earn it?

Have it already ?
What do you think of SingIt ?  Scroll down for our comment section.