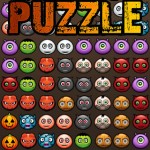 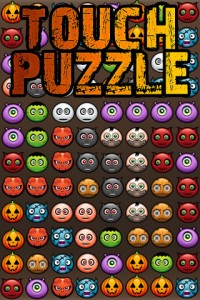 I’ve always said puzzle games are a big genre on the App Store. But the issue is that with a growing number of such games, there’s little to no innovation. A lot of the puzzle games seem to follow a precedent and aim to further develop a puzzle concept through spicier graphics, perhaps an extra layer of difficulty. It’s been a while since I’ve played a puzzle game that redefined puzzle games or introduced a new and exciting concept for the genre in the App Store.

Unfortunately, Touch Puzzle is not that game either. The concept of the game is similar to other games. You’re presented with a board filled with different icons and you need to connect three or more identical icons to remove them from the board. When you do, more icons appear from the top.

The way you connect three icons is by drawing lines with your finger on the screen. Each line needs to connect at least three adjacent icons of the same type. You can go horizontal, vertical, or both in the same action. As soon as you remove your finger from the screen, the line is considered drawn and the icons (if applicable) are removed.

You’re also playing against a timer, so you better think fast and act faster. The more icons you knock out of play, the more seconds are added to the timer. At the same time, you can level up and the game adds additional icons to the mix, that will complicate matters even further.

A Touch Puzzle has no levels per-se, no difficulty settings and no other settings. It’s just you and the game. You start with 50 seconds on the clock, level 1 and 3 types of icons on the board. At about 4,500, you get to level-up and one more icon is added on the board.

The game seems more fit for a Halloween release with the graphics as they are now. The icons themselves take the shape of Halloween monsters, such as pumpkins, zombies, devils or ghosts. The grunge effect for the font itself recommends this app as a Halloween game.

Have this iPhone App already ?
What do you think of A Touch Puzzle ? Scroll down for our comment section and let us know!