Home » Snow Bros Is Back In Business

Snow Bros Is Back In Business 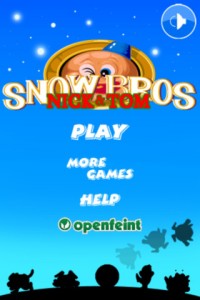 When was the last time you played a game on an actual arcade machine? Remember the thrill of knowing that you just have one coin to beat the game? Or those 8-bit characters moving across the screen? It all sounds like ancient history. But it doesn't have to be this way. Because today, you can play one of these arcade classics straight from the comfort of your chair. All you need is to purchase Snow Bros from the AppStore, and watch your iPhone and iPad turn into real arcade machines.

What is Snow Bros?

If you haven't played Snow Bros on an arcade machine before, you should know that it's a fun game, with a pretty standard plot. You are a snowman and your goal is to destroy the monsters looking to melt you down, clear all stages and save the princess. Only that instead of guns and bombs, you have snow. Throw it at your enemies, capture them inside snow globes, and roll them against other globes, before they melt and the enemies captured inside escape. Pretty basic, huh?

You can select between two game modes. The classic one-coin mode that has you clearing the entire game with just one coin, ie. no restart. There are no stages here and you can’t put down the game, only to come back later and pick up where you left off. The Stage Mode is where you can clear the game, stage by stage, and any cleared stages can be replayed.

Snow the monsters, clear all levels, save the princess

Playing Snow Bros means going through over 50 levels and defeating about 20 different types of monsters. From slow, easy to kill enemies, to actual bosses, Snow Bros will put your speed and agility to the test. The faster you move and destroy all the monsters in one level, the sooner you get to reach your goal. But, as you delay, waiting for the monsters to come to you instead of hunting them down, new dangers will appear to harass you, like the pumpkin ghost. The ghost moves faster and can manifest anywhere on the screen, without giving you an easy chance of escape. So, it's ok to have a plan, but don't wait too long to make your move.

Snow Bros is extremely easy to control, since there are only a couple of things that your character has to do. The basic controls are move (left, right, up, down) and throw snowballs. Slaying monsters and clearing levels will bring you items that you can collect, achievements and points. To see who's the master of Snow Bros in your group, you can compare achievements with your friends. So, be careful to collect all the items and destroy all the monsters as fast as you can, if you want to be the group leader.

From graphics to sound, Snow Bros is exactly how you remembered it to be, when playing it on an arcade machine. It's true that it doesn't have the graphics, plot or game play of today's games. But who cares about all these stuff when you are given the chance of reliving the thrill and joy of playing a classic?

Snow Bros is available as an universal download for iPhone, iPad and iPod Touch.

Have this iPhone Game already ?
What do you think of Snow Bros ? Scroll down for our comment section and let us know!