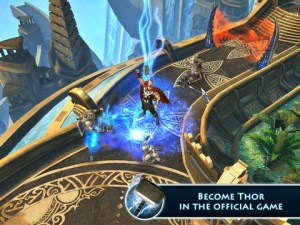 So far, Thor: The Dark World looks like quite a big hit. It's currently number one in the Box Office, and in the opening weekend it made more than half its budget. And the game inspired by the movie is not too shabby either. It's got a 4 out of 5 stars rating, although I think it could easily get to 5 stars. And it's totally free of charge. Now, how cool is that?

Thor: The Dark World - The Official Game looks like a game that was rather designed for a Playstation or an X-Box, than for an iPad or iPhone. We're talking true HD graphics here, and a captivating story to boot. But the advantage of playing it on your iPad, rather than on your Playstation or X-Box stands in the intuitive and extremely easy to use controls. Tap to go to a certain place. Tap to attack your enemy. Tap on the Thunder icon to unleash Thor's wrath. And so on. And the same stands for the iPhone. But my advice is to play Thor: The Dark World - The Official Game on your iPad, rather than your iPhone. To make sure you enjoy the visual experience to its fullest.

Surround Thor with other valiant warriors

As far as the actual gameplay stands, your main job is to control Thor stop the Dark Elves, along with their leader, Malekith, from taking over the Nine Worlds. To do so, you have Thor's strength on your side, along with his hammer and his amazingly powerful thunder power. Plus, valiant warriors like Asgardians and Einherjars that you can summon to help you. And you should summon them as often as you can, thus making sure Thor is always surrounded by them, because Thor: The Dark World - The Official Game is also a pretty tactical game. If you want to win, you have to decide when to unleash Thor's thunder. When to call the warriors, and which type of warrior is better suited for the battle. What features of your heroes to upgrade first. And so on.

Try not to get Thor killed (too many times)

The only thing that troubled me a bit had to do with Thor's HP. If you keep Thor safe a couple of minutes, the HP bar will eventually be full again. But if you're looking to buy HP potions to get more lives, you can only buy them using certain items. But fortunately, if you clear some missions you get extra HP potions. You can also buy them and they're pretty cheap since you can buy 200 of them with $1.99, this meaning 60 extra lives. So, in the end it's good, but I think it would be even better if you could also earn them somehow.

Clear all missions, and destroy the enemies

Overall, I can't wait to get back to business and see what other missions I have to help Thor clear. After all, there are 90 missions ahead of you, when you start playing Thor: The Dark World - The Official Game, each with different challenges and goals. Plus, 10 powerful hammers and armor sets to unlock and upgrade, new skills, and 4 Survival Arenas. It's a blast!

Have this iPad Game already ?
What do you think of Thor: The Dark World - The Official Game? Scroll down for our comment section and let us know!