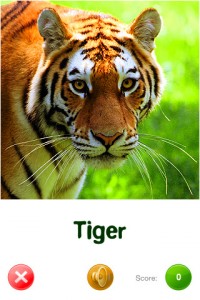 There's no news in saying that the iPhone is like having your very own Toys 'R Us in your pocket. It's gaming delight at its best, where age limit doesn't really play a role. Even your toddler could do it, and here's one good example of just this.

Touch & Discover: Animals is the simplest iPhone app I've seen that tries to create a learning environment for your young ones. The app, that uses just simple touches, lets your toddler recognize animals and learn how the unique sounds they make.

I didn't. What about the praying mantis? I didn't even know they made sounds. That's the whole point of Touch & Discover: Animals. The app uses the simplest of game mechanics and teaches your toddlers about the wonderful world of animals. How a tiger looks like? What sounds does it make? It features a grand total of 57 different animals, along with high quality photos and sounds.

The game mechanics? Couldn't be simpler. The child is shown four pictures of animals and it asks to tap one or another. If the child taps the right one, he is congratulated and he will hear what that animal sounds like. If the child touches the animal's name, the app will spell out the name letter-by-letter.

After all is said and done, the app also wants you and your child to play along with sounds. So after you've just found out what a kangaroo sounds like, can you sound the same?

Each correctly identified animal gives your child a point and if you choose to end the game, you can share your score online on Facebook, Twitter or via Email.

Have this iPhone App already ?
What do you think of Touch&Discover: Animals ? Scroll down for our comment section and let us know!