Home » Whatever You Do, Don’t Drop! 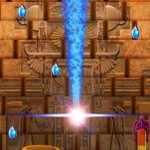 Whatever You Do, Don’t Drop! 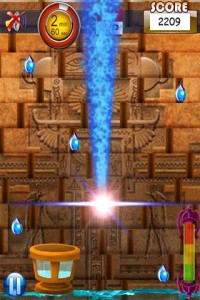 It's been a while since I have played a game as complete as Enigmo. A game that has it all, is not afraid to combine bells and whistles with simple game play, and succeeds at it. Such a game is Don't Drop 2 - a simple game with stunning graphics and great background music.

How to play Don't Drop

The objective of the game is to gather all the water droplets into the bottom bucket by shifting the tiles of the wall either left or right so that the seepage in the wall guides the droplets into your bucket. It's worth mentioning that the bucket is slowly moving from left to right and back. While the various water droplets are in free fall, once you direct the wall seepage so that they fall within, they stop until the canal is continued downwards.

If your bucket gets filled, the game will offer a new bucket to you. If too many droplets drop outside the bucket, the water level rises and it's game over. Once you collect the target number of drops inside the bucket, a new stage is unlocked.

The game features various traps and powerups. Occasionally, a frog will come either from left or right of the screen and swallow all the drops. This will increase the water level faster. The bar of soap will turn water droplets into bubbles. There are also various boosters that give you points. Put out the fire using 5 droplets and you get 200 extra points. The magnet (it's pretty wide spread in the first few levels) lets you collect all the droplets on the screen at a particular position.

Don't Drop 2 features two different game modes. In career mode, you need to pass 9 unique levels, each with its own twists. In Timer mode, there's no time limit, except for watching out not to drop those water droplets or it's game over.

In career mode, with each level you pass, you unlock the next one. While the game mechanics are the same in every level, the layouts and artwork differ, but they're still amazing. The 9 backgrounds are inspired from various places and civilizations, from Egypt, China, India to the ancient Mayan civilization. The graphics are truly fantastic. I believe the game was originally designed for the iPad, and now transformed for the iPhone, and let me tell you, nothing was lost in the transformation. I've played it on an iPhone 3G, and I can only imagine how swell it looks on the Retina display.

Don't Drop 2 has it all. Amazing graphics, sweet sound effects and music, simple and addictive gameplay. As I've said in the beginning, some of the graphics remind me of Enigmo, but Don't Drop 2 is a game of its own, and as such it deserves its own applause. 4 / 5 and a bow from me.
Also Available: Don't Drop 2 HD - for iPad

Have this iPhone App already ?
What do you think of Don't Drop 2 ? Scroll down for our comment section and let us know!

One Bite to “Whatever You Do, Don’t Drop!”