Home » American Ball is an arcade classic, reinvented for the iPhone 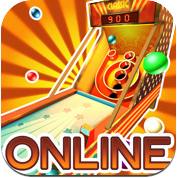 American Ball is an arcade classic, reinvented for the iPhone 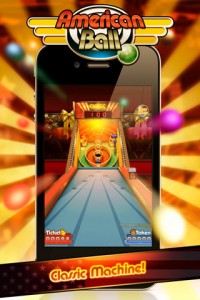 With American Ball, you can create your own playground lobby for this classic ball rolling game. Topped with impressive 3D artwork, a wide variety of decorations and a simple gameplay system, American Ball may very well reside on your iPhone for good.

For those of you who don't know the game, the mechanics and object are simple. You have to throw balls down a lane and place them in the differently numbered holes at the end of the lane. Each hole gives you a certain number of points, with the holes that are farthest away, and almost as small as the ball itself - making it harder to get in, having a higher score.

In American Ball, you have 9 turns and you have to make the best of it. At the end of your turn, depending on the score you got, you're awarded a certain number of tickets. And this is where the game pushes a reward system.

Win enough tickets, and you can purchase different decorations for your game lobby, varying from wall tapestry, lamps, decorative objects such as clocks, thermometers, paintings, flags, or even another game, with a different theme.

If you can't figure out what to do with the tickets you won, it's not because of you. Presumably, you can decorate your room, with new ceilings, new machines, new carpets. These all cost tickets, but I wasn't able to use any of mine to do these things from within the game. You need to go back to the original screen, right before entering your lobby. Rotate to redeem and see what you can afford. Then go back to your game and use that object to decorate your walls and whatnot.

I personally saw the need to be able to spend tickets from the same decorate screen, without having to go back a few screens, then buy, then return. If you can get past this little confusing system, then you're in for a treat.

The replay value is in the rewards

Granted! It's not much fun to toss your ball down the lane. After a while, you get pretty good at it and score more tickets than you can spend (presumably). So there's a low replay value in the gaming itself, but the developers have figured out a way to keep us coming back for more. The object of the game is no longer to play the game, but rather to win as many tickets as you can to decorate your lobby.

The possibility to completely customize your lobby with accessories coupled with the ability to visit other players' rooms and battle against them make American Ball more engaging and addictive.

Have this iPhone App already ?
What do you think of American Ball ? Scroll down for our comment section and let us know!